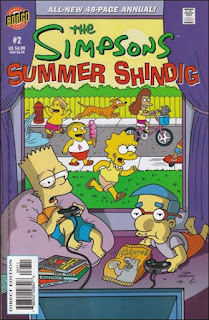 Is there any sweeter moment in the put-upon life of man than summer vacation?  For a few delicious months, young humans are burdened by no homework, no textbooks and no teachers.  Instead they are free to plash in pools, rot their minds with videogames, and stuff themselves with candy.  It's the greatest experience of liberty most people will ever enjoy.  It's enough to make you want to sing and dance around with puppets.


Today we're going to be looking at a time in America when students actually had to fight for their right to go on vacation.  Spoiler alert:  it involves violence.  And a poem.

The people of the backcountry of the United States are known by a number of names.  Hick.  Hillbilly.  Redneck.  Trailer trash.  But even though they might be disparaged, their culture has a long history, stretching back to the borderlands of England and Scotland.

In the backcountry of the US and the borderlands of Britain schoolchildren enjoyed a wild ritual called the 'barring out' which lasted until the beginning of the 20th Century.  The practice also went by the name of the shutting out, the penning out, or the exclusion.  (Any of these would be great names for a tough cable police procedural, if any TV writers are reading.)

The barring out happened every year around Christmas--and sometimes around other times of the year if the students were particularly frisky.  The bigger, tougher students in the class would push the teacher out of the school and barricade the door until the teacher allowed them a holiday.  If the schoolteacher granted this freedom, the kids gave him small presents.  Because, you know, thanks for not doing your job Mr. Teacher.

Sometimes this would get bloody.  One source records the school students filling the door "with benches and other heavy things."  The schoolboys and the school master's friends ended up facing each other in a 'fair fight.'  Although I have no idea how the fight could be fair because, you know, it was between grown men and children.

Here's a poem about barring out, from Scotland:


Liberty, liberty under a pin
Six weeks holiday or never come in!

Your humble blog-writer himself is an elementary school teacher, and I can assure you--if my students barricaded my classroom door with desks and threatened to beat me up if we didn't have a six week holiday, I just might give in.  Perhaps.  Just try me kids.  See what happens.

I learned about this ritual from the much-be-blogged Albion's Seed by David Hackett Fisher--also the source for my posts on Puritan Sex, Gander Pulling and Andrew Jackson's dating tips.

There's a History Today article on barring out as well--but it's behind a paywall so I could not consult it for this post.
Posted by Unknown at 1:24 AM