Why Do Grooms Carry Brides Over The Threshold? 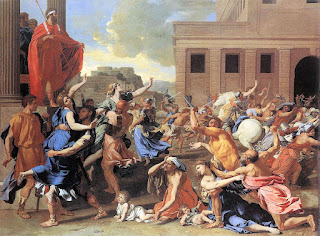 If you ask someone why they follow a particular tradition, often they can offer no answer more enlightening than a shrug. The curious, though, know that everything that happens in the cacophony of human life has an explanation. Many of these explanations can be found on this humble blog.

Today we'll be explaining the odd practice of carrying a newly-wedded bride over the threshold of the new home. Why is that exactly?

According to Plutarch, this practice dates back to the very founding of Rome. Back then Rome was not Rome. It was little more than a refuge for felons fleeing justice and slaves fleeing their masters. The new city had a problem shared by parties of middle school boys throughout the ages: no women.

The Romans came up with a particularly Roman solution. They would simply kidnap the women of the village next door and then bam!--instant sex ratio rebalancing! The Romans invited their neighbors the Sabines over to a party and, at the signal of Roman head-honcho Romulus, every lonely Roman man took himself an unclaimed Sabine girl.

Like, took them. With swords and force and killing and kidnapping. This became immortalized ever after as the legendary rape of the Sabine women.

So what about the whole carrying the bride over the threshold thing--how does that fit into a three-thousand year old mass-kidnapping?


It continues also a custom at this very day for the bride not of herself to pass her husband's threshold, but to be lifted over, in memory that the Sabine virgins were carried in by violence, and did not go in of their own will.

So every time a new husband takes wife in arms and walks across the threshold of their new home, the couple is participating in a symbolic kidnapping that stretches all the way back to the legendary founding of the eternal city of Rome.

Makes you feel happy to be human, eh?

More weird wedding traditions can be found over at How Stuff Works.