Eight Reasons Why Listicles Are The Greatest!

Listicles are totally the literary genre of 2015. There's already a listicle on any topic imaginable. They range from the self-obsessed (18 Struggles Of Having An Outgoing Personality But Actually Being Shy And Introverted) to the serious (9 Facts About Eurozone Crisis) to the dadaist (7 Everyday Products That Were Invented By Accident.) Since they're so prevalent, so obviously superficial, so click-baity, they are easy to make fun of. But I think listicles have a lot to teach us about writing on the internet. Especially for people who don't know how to write on the internet (like academics.)

So let's dig into why are listicles so popular.

Facebook and Reddit and all the other social media tornados give more popular links more prominent placement. This means that even marginal differences in the initial popularity of an article compound into huge differences in that article's virulence. Think of it as hypertext Darwinism, red in link and metadata.

Of course, this leaves an important question: what makes listicles more popular than other forms of internet writing?


2 Listicles are easy to skim

Or skim on, I should say.

Listicles are made for people who don't have the time to read the wordy waffling of the wannabe writers who produce 99% of the content on the internet. You can get the gist of the listicle simply by passing your eyes over the super-huge headlines. (That's why they are big and bold.) The prose elaborations beneath the headlines are purely decorative. Or a place to shove supporting evidence; usually statistical. Or a place to put a joke. (Did you know that 15% of listicles have a made up statistic in them?)

Helpful for readers who don't have a lot of time.

100 Reasons to Not Have Kids? That's going to take half an hour to read. Skip it.

Eight Reasons Why Listicles Are The Greatest? Short enough to read over your coffee break. Share it.

4 Listicles are easy to write

There is no thesis to a listicle. No need for sustained argument. The writer can simply rattle off six, ten, or twelve half-warmed observations about a topic, make sure their there are no misspellings, and hit post.

They're also easy to add to. Did you stumble across a relevant article right at the end of the writing process? You don't need to start again from scratch. Just add another bullet point.

The listicle's big, bold headlines encourage an impersonal authoritative voice that makes writers sound like they know what they are taking about. There can be no waffling in a listicle heading, no hedging of bets, no qualifications.

It is the exact opposite of the way we are usually taught to write prose. And a lot more fun to read. 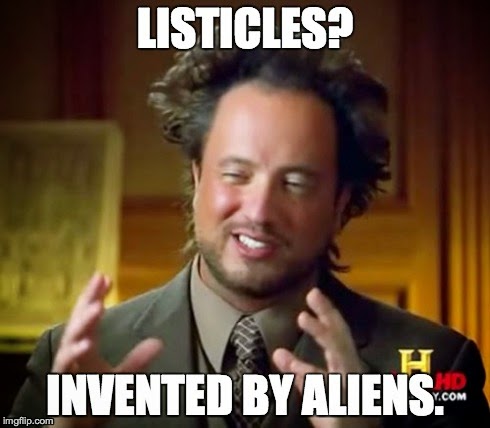 Because let's be real. This shit is gonna get skimmed.

8 Listicles stand out in a crowd

New rule of the internet: If it it exists, there is already an article about it that has received more pageviews than you ever will. (Call this a G-rated Rule 34.)


So what's the point? (for academics)

I'm not lot saying that the listicle is the future of writing. That would be horrifying. Imagine if Clifford Geertz had written 17 Things About Culture I Learned From This Island Bloodsport (That Will Blow Your Mind!)

Yet as scholars continue to wring their hands about the fact that nobody is listening to them, maybe it's time to rethink the kind of writing they produce. The quality of tenure-worthy scholarship hasn't changed for a couple decades. It's the same intentionally boring, incredibly inaccessible crap that only highly educated people can read. And highly educated people find it boring, too.

The listicle accepts the fact that most work is written to be skimmed. The listicle does not shy from mixing information with entertainment. The listicle acknowledges that we want more than six people reading the stuff we write. Academic writing would be a lot better if it followed suit.

Thanks for reading, here is a gif of a monkey hugging another monkey