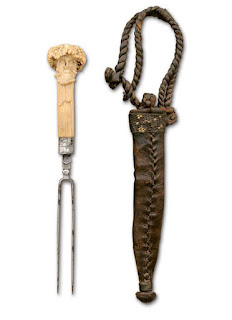 God in his wisdom has provided man with natural forks—his fingers. Therefore it is an insult to him to substitute artificial metal forks for them when eating.

European dining before forks was a messy, finger-licking, stab-happy affair.  The most common eating utensil was the knife, used to cut and spear meat.  Everything you didn't spear with your knife-point, you ate with your fingers.

These knives had a troubling habit of being used in knife fights, finding their way into kidneys and other people's faces.  This actually is the reason for the popularity of chopsticks.  Confucius himself said:


The honorable and upright man keeps well away from both the slaughterhouse and the kitchen. And he allows no knives on his table.

Which makes sense if you want to reduce the number of dinnertime stabbings.

The fork was first used in the classical Mediterranean world, but not to transfer food from plate to mouth.  Instead forks were used to hold meat down while it was being carved.  The good Greeks and Romans ate with their hands, like any other sensible person would.

The practice of eating at the table with forks came, like so many other things, from the East.  Around the 7th Century people in the Middle East and Byzantine Empire started to use forks at the dinner table so that eating wouldn't leave their fingers covered in spittle and sauce, and by the 10th Century forks were common on the wealthy table of the East.

So it makes sense that at the turn of the 11th Century, when a son of the Doge of Venice married Byzantine Princess Maria Argyropoulina, the bride-to-be would bring in her luggage a set of golden forks.  She proceeded to eat with these peculiar pronged things during the wedding feast, scandalizing proper Venetian society.  Because, you know, why not use your fingers like everyone else?

The scorn of proper Venetian society quickly turned to schadenfreude when the Princess died of the plague two years later.  Could her overly delicate fork-use have anything to do with it?  Saint Peter Daiman certainly thought so.


Nor did she deign to touch her food with her fingers, but would command her eunuchs to cut it up into small pieces, which she would impale on a certain golden instrument with two prongs and thus carry to her mouth. . . . this woman’s vanity was hateful to Almighty God; and so, unmistakably, did He take his revenge. For He raised over her the sword of His divine justice, so that her whole body did putrefy and all her limbs began to wither.

A fitting demise for such an affected princess.

Even though forks seemed to carry the promise of death-by-plague, they became popular in Italy. The history of the fork in Europe now becomes a story of intrepid travelers foisting the new convenience on an unwilling society.  Catherine de Medici went from Italy to France to Marry Henri the Second she brought forks.  Along with the entire concept of what we now call French cooking.

The first person to bring forks to England was a traveller named Thomas Coryat who had walked his way through much of Europe and picked up the habit of using forks in Italy.  For bringing his own forks back home he was lambasted, mocked, and given the nickname furcifer by his friends--a pun on the word fork, and also someone doomed to hang.

But the fork was now in England, and it would not be ignored so easily.  In Shakespeare's time, the fork was used by dandies and the rich to mark just how different they were from the common rabble.  Look, they said, with their gilded, crystal-studded, bejeweled eating utensils--I don't have to stick my fingers in my mouth when I eat.  I am using a fork.  Which you cannot afford.

I was inspired to write this post by the Shakespeare's Restless World episode Snacking Through Shakespeare.  My main source was the fantastically detailed post The Uncommon Origins of the Common fork on Leite's Culinaria.
Posted by Unknown at 7:28 PM