Was The Ancient Roman 9/11 An Inside Job? 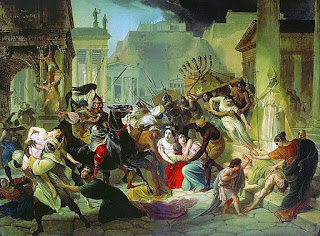 In 468 A.D. a combined fleet of Roman and Byzantine ships sailed across the Mediterranean to the city of Carthage.  They were going to teach a hard lesson to the Vandals, a group of Barbarians who had sacked Rome twelve years earlier.  Since then the Vandals had set up an independent kingdom in North Africa, sending out pirates with impunity, living proof to anyone who looked that Rome was in true decline.

In a final act of unity, Westren Rome and Eastern Rome gathered their strength to defeat the Vandals.  103,000 pounds of gold were spent to outfit a fleet of 1,100 ships.  At the time it was the most expensive naval fleet in history.

It did none of those things.

The fleet was commanded by the Byzantine Empress' brother, a sniveling schemer named Basiliscus.  The general earned himself a few early successes.  In the first sea battle, the Vandal King Genseric's forces were trounced, leaving the Imperial fleet free to surround Carthage.  Ground forces were closing in.  Genseric holed himself up in his palace, waiting for the vengeance he deserved for sacking the eternal city of Rome.

But instead of attacking, general Basiliscus anchored his fleet about 45 miles from Carthage, at Promontorium Mercurii, what is now known as Cape Bon, and waited.

Genseric sent an embassy to the Roman ships promising an easy surrender and buckets of gold.  We need only a small truce before the actual surrender can happen, the Vandal embassy said.  Just so that we can get the whole idea of giving up an okay by the rest of the Vandals.  Basiliscus agreed, passing his fate into braver men's hands.

In Carthage Genersic called a council of war.

Five days later, night fell on the ancient city of Carthage.  The wind picked up, blowing towards the Roman fleet.  This was the time that Genseric was waiting for.  As the clouds pulled over the moon, Roman soldiers saw something strange flicker across the water.  At first, they must have been curious.  Then they were afraid.

The ships in the Vandal harbor were on fire.  At once the wind hit the sails of the burning ships, blowing them towards the Roman fleet.

Genseric was using his own fleet as flammable missiles.

The Roman ships were packed closely together, and since they were wind-powered, they couldn't easily get out of the way of the approaching fire ships.  They were sitting ducks.  Vainly, the Romans tried to lash their ships to rowboats and paddle away.

But it was too late.  The unmanned flaming ships rammed themselves against the Imperial fleet, and fire spread from one ship to another.  It was then that the un-firey Vandal ships attacked.  The result was that the Roman fleet--the largest group of ships gathered for battle ever--was crippled.  Over half of its ships had been destroyed.  The survivors limped back home, dogged by pirates the entire journey.

At the Battle of Cape Bon, Europe learned that the barbarians would not be defeated.  Soon, the Romans would be gone.

But Was It An Inside Job?

The Byzantine historian Procopius thought that there was something suspicious about the battle.  He insists that Genseric bribed Basiliscus to agree to the five-day truce, thus giving the Vandals enough time to prepare their flaming ships.  Maybe Basiliscus wanted his brother-in-law Emperor Leo to suffer an embarrassing defeat.  Maybe he was just stupid.  It is always possible that he was merely greedy.

Or maybe Basiliscus was no traitor at all.  Maybe he had been framed.  The Romans had a habit of pinning the blame for defeats on treachery and ill-fortune, while taking all the credit for the victories.  This is a natural quirk of human psychology.

And it's not like Basiliscus didn't have any enemies.  About ten years after his defeat at Cape Bon, Basiliscus briefly acceded to the throne of the Eastern Empire, having deposed the unpopular Emperor Zeno.  But after a year Zeno wrested power back from Basiliscus, killing the former Emperor.  Now Basiliscus' enemy was free to write the histories, blaming the hapless brother of an Empress for everything that had gone wrong ever.

My inspiration for this post is the amazing and soon-to-be-completed History Of Rome podcast by Mike Duncan.  My main sources are the Fall Of The Roman Empire by Peter J. Heather and A History of The Vandals by Brian 'Gaiseric' Adam.