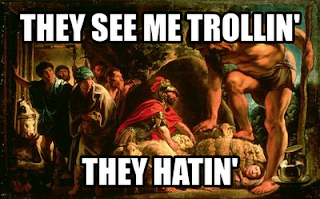 One fine night on the Island of the Cyclops, Odysseus the many-schemed plunged a sharpened stick into the eye of the bone-gnawing Polyphemus.  "Who are you to blind me?" Polyphemus bellowed, his story nearly done.  "Who am I?" answered the canny Ithican, "I am no one."  Polyphemus' friends came running to see why Polyphemus had a stick in his eye.  "Who did this to you?" they asked.  Polyphemus, son of Poseidon answered:  "No one!"

Odysseus demonstrated that nothing can really matter.  Today we're going to take a look at one of the greatest inventions in the history of thought:  zero.


Math For (Homeric) Poets
The importance of zero can be seen just by imagining how Odysseus might have done math.  For us this calculation is straightforward:

We chop the equation into manageable chunks.  First we subtract one-thousand from two-thousand, then two hundred from three hundred, and so on.

Odysseus--so cunning that he was beloved of the godess of wisdom herself--would have struggled with this simple act of arithmetic.  For him the equation would have been reckoned like this:

And done in the head or scratched on clay using primitive numerals--Odysseus being most probably illiterate.

With the development of writing, math became a little easier.  But only a little.  Here's how Caesar would have contended with our arithmetic problem:

This kind number system is called additive notation because all you do is add up a series of symbols.  One thousand for the Romans is just M.  You want two thousand?  Just write MM.

The number system we use today is a positional notation, and it is infinitely more useful than additive notation.  In positional notation, the value of a given numeral depends where it comes in the figure.  In 1234, the symbol 1 stands for one-thousand.  In 4321, the same symbol 1 simply stands for one.  The same symbol--two different values depending on where in the number the symbol is.

There's a problem with positional numbering systems that you would never think was an actual problem unless you had to deal with it.  How do you represent one hundred and one?  You have one hundred, no tens, and one one?  Does it just look like this? 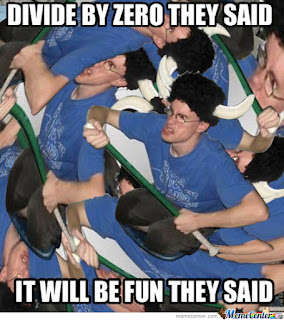 This is why zero makes all the difference.  Once you have zero, you can just plug it in whenever you have an empty column, and our previously unclear mark above becomes the familiar 101.

It's entirely possible to have a positional numbering system without a zero--though it must be quite awkward.  The Babylonians, Indians and Mayans all stumbled around with positional systems for hundreds of years before coming up with a zero.  The Chinese positional notation system never introduced a zero ever, and it continued to produce stunning mathematicians for longer than America has been putting bacon on hamburgers.

Super Zero
An amazing thing happens when the symbol zero becomes more than just a mark representing a gap in the tens column, and becomes a real number--a number every bit as solid as seven or seventy-seven.  This happened only once in human history, in India around the sixth century.  For comparison, at this time in Europe we were busy lolling around in mud and ruin.

Once zero is recognized as an actual number, a whole new universe of mathematics opens up.  Zero allows us to envision negative numbers.  The positive numbers stretch on infinitely to the right of the zero, the negative numbers stretch on infinitely to the left of the zero, and the zero stands as a fulcrum between plus and minus.  Zero also allows the development of complex algebra, allowing whole extra years of math courses to be added to the school curriculum.

There are a ton of great sources that I consulted for today's post.  Etymology Online and Mediatinker were particularly helpful.  If you're still curious about more of the odds and ends of zero, check out Numbers of Interest on Zero.  If you still haven't had your fill, the always chin-scratchingly good In Our Time has an episode on Zero as well.
Posted by Unknown at 7:50 PM