The Worst Sport Of All History: Gander Pulling 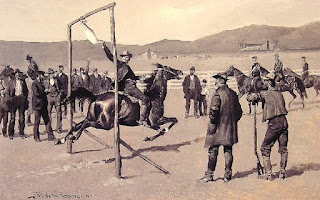 Necessity may be the mother of invention, but boredom stands as invention's disreputable but really cool friend, who smokes cigarettes and cuts class, and dares invention to do stupid things that sometimes end up being really awesome.  Like jump off of snowy ramps on skis.  Or cover your entire body with tattoos.  Because, you know, what else are we going to do today?

But for every invention boredom makes that reaches silly-putty levels of awesomeness, ten or twenty must suck.  Like a Whoppi Goldberg Dinosaur Buddy Cop Movie.  Or like Gander Pulling.

What's Gander Pulling you ask yourself.  Just the worst sport any human has ever thought to do.  Worse than curling.  Less sensible than cricket.  More violent than lacrosse.

Gander Pulling, also creatively called Goose Pulling and Pulling the Goose, is an ancient blood sport played in England, Belgium, Netherlands, and the Chesapeake Colonies.  The preparation for the game is simple.

Take a wooden pole or a tree branch. Hang a goose on it upside-down.  Grease the goose's neck.  Get your friends together and jump on your horses.  Now you are ready to play!

The unlucky contestants would take turns riding by the unlucky goose, trying to part goose head from goose body.  What made this especially interesting for the terminally bored country population was that the goose was jealous of its life and tried to defend itself from decapitation.  It would writhe its hideously long neck, squirm from the riders' grasps, and probably emit annoying honks.  Riders sometimes had fingers and thumbs bitten off.  Some were even killed as the goose pulled them from their horses.  Which has to rank as one of the most undignified deaths.

But eventually the game would crown its champion, the one rider  finally man enough to pull the dreaded goose's neck from its goosey body, covering himself in a splatter of blood and earning himself--one goose.

Thousands of spectators might turn out to watch this dreadfully dumb game.  It's still played in some parts of the world, though the goose has been pre-killed as an olive branch to our pesky respect for animal well-being.

Next time you hear people say video games are violent, tell them about gander pulling.

I learned about this from David Hackett Fischer's Albion's Seed, also the source for my post on Puritan pre-marital sex.
Posted by Unknown at 12:38 AM

What dreadful things humans do to the beasts and even to other fellow humans. I've heard it said that it animals knew anything about a devil it would wear a human face.