There's A Word For Everything: The Cupertino Effect 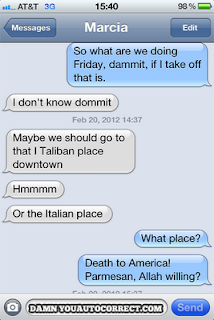 It was really only after the invention of the printing press that people cared to standardize spelling.  And this was a serious cause, on the same level of intense commitment as we might see today in global warming protestors.  People wrote pamphlets trying to reform spelling, wrote books, had meetings, had more meetings, made proposals, and tried to make the mess of English spelling more sensible.  Hopefully the spelled consistently, though, knowing that humanity is a hypocritical race, they probably didn't.

Anyway the reformers won, and we are left with wonderfully sensible spellings like the word 'laugh' 'name' and 'debt'.

Generations of spellers have struggled with pen and dictionary trying to remember the irrational jumble of letters that English calls its spelling.  How many countless hours of study have been wasted just because our spelling doesn't make sense?  How many lifetimes ruined by forgetting a silent E at the end of a word?

My generation is the last that will ever take spelling seriously.  And it is the first that does not need to spell properly.  The reason is that in our word processing programs there exists a friendly little fairy called a spell checker that looks at every word we write and makes sure that it is of correct orthographic assembly, and, if it is not, puts a handy little red line under it.

For every convenience of life, we suffer an equal inconvenience.  For spell-checkers, that thing going wrong is called the Cupertino Effect.

You have no doubt experienced the Cupertino Effect.  You slam your hands on your keyboard in rude approximation of a particular English word like cooperate.  Then you right-click on that scramble of letters to find the correct spelling.  You choose the first suggestion and continue your merry writing way. But the fates have not been kind to you!  The suggested word was not in fact the word you wanted!  You have been cursed by the Cupertino Effect!  Fie!  Alas!  Alack!

The Cupertino Effect got its name because early spell-checkers only had the hyphenated version of the word co-operation in them.  People who wrote 'cooperation' stumped the spell checker, which gave only a single suggestion:  the California town of Cupertino.  Thousands of people have been duped by this very mistake--including writers from the UN, the EU and NATO.

As electronic communication becomes ever more common, the Cupertino Effect will daunt us more and more.  Someone should make a blog detailing all the funny things that can happen to us because of it.  Oh wait, this is the interent and there are no new ideas.
Posted by Unknown at 7:20 PM