In Which Andrew Jackson Doles Out Dating Tips 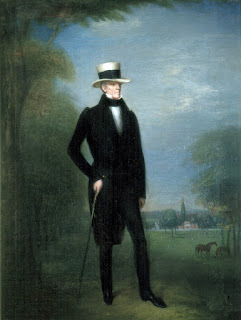 This is Andrew Jackson.  Mr. Twenty Dollar Bill, US President Number Seven, poster-child of the Second Party System.  Look at the proud cut of his jib.  Look at the horse in the background.  Who owns that horse?  Andrew "Old Hickory Jackson," that's who.  He probably owns the leftmost clump of trees as well.  And that charming house in the background.  And the painter who painted his portrait.  And I'd suggest he owns the rightmost tree-clump, too.  He's just that rich and cool and ANDREW JACKSON PLEASE BE MY FRIEND.

Ahem.  Regardless of your politics--Whig or Tory or Democrat--you have to admit Andrew Jackson is a bit of  badass.  Well prepare for some badass relationship advice because today Andrew Jackson is going to help you get the girl-friend or boy-friend of your dreams. 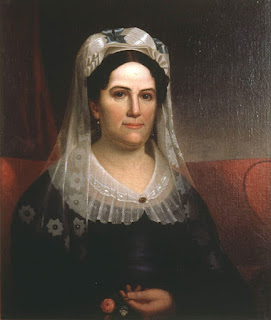 There she is, Mrs. Rachel Jackson herself--nee Rachel Donelson.  But when Andrew and Rachel first met, Rachel went by Rachel Donelson Robards and was unhappily married to one, Lewis Robards.

What happened next is unclear for a number of reasons.  One reason is that in frontier Tennessee, people weren't sitting around chronicling all the amazing things they were doing on their blogs or twitters whatever--they were busy trying not to die--so the paper trail on the Jackson courtship is a little tangled where it even exists.

But the biggest reason for the story's muddy nature is that when Andrew Jackson ran for the office of President, his political enemies siezed on his dubious nuptial status as proof of Jackson's dubious character.  The events surrounding Andrew and Rachel's love story became subject to politics and so, as always, two truths emerged--one for each party.

Anyway--here's one story of how Andrew won Rachel.

Jackson announced to Lewis Robards that in order to solve the whole Rachel-being-married-to-someone-else thing he would "cut his ears out of his head."  Jackson was arrested for this threat.  But before Jackson'a case came to trial, Old Hickory chased Robards out of town, brandishing a butcher's knife.  Jackson's court case was disimssed because the plaintiff didn't show up for the trial because the plaintiff was too busy trying not to get hacked to pieces by the defendant.  Sounds like an episode of Justified.

At this point Jackson thought that his courtship was a done deal, married Rachel, and called it legal seeing as Rachel had been abandoned by Lewis.  You know, because he skipped town.  Because Andrew Jackson would kill him if he got back in town.

Andrew Jackson displayed so much bravery and mettle and balls that when the movie was made of his life he was played by Charleton Heston. 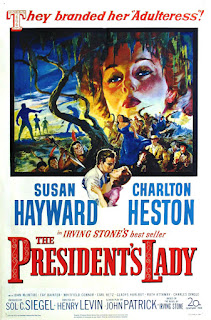 To compare, John Adams got played by Paul Giamatti. 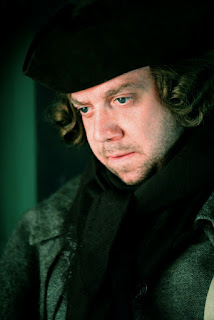 The story doesn't end there though because Andrew Jackson wasn't just any old imperious butcher-knife wielding slave-owning bad-ass.  He was a politician.  Dogged by insults about his wife, in 1806 Jackson did the only rational thing.  He challenged his slanderer to a duel.  TO THE DEATH.

Jackson's opponent Charles Dickinson was a very good shot.  Jackson let Dickinson fire first.  Jackson was hit in the chest but the bullet missed his heart by inches.  Under the rules of the duel Dickinson had to stand still and await his opponent's reply.  He did.  And Jackson shot Dickinson dead.

You couldn't challange the facts to a duel, though, so the slanders kept on coming--especially as Jackson's political career improved.  In 1828 Jackson ran for President and the whole 'stealing his wife from another man at butcher's-knife-point' came up in the campaign.  His enemies--of which you can guess were legion--seized on it like Fox News seizes on terrorist fist bumps.

Here's what one of the anti-Jackson crowd said:


Ought a convicted adulteress and her paramour husband to be placed in the highest offices of this free and Christian land?

Actually this stuff evidently really did hurt.  Rachel Jackson died a few months before Jackson was sworn in as President.  Andrew Jackson blamed the stress of the campaign for her death.

To recap, Andrew Jackson's dating tips:
Try them out at the meat-market of your choice!
Posted by Unknown at 6:27 AM

Just Check Your Website now.. Its Designed Well But Un fortunatly I am un able to understand what you write in this Article. Tennessee personals

When looking for a way to get your ex back , a Text Your Ex Back review is important. This product is not a magic pill or a miracle cure. While it will help you get your ex back, it will also take time, effort, and hard work to be successful. To get more details about text your ex back review, check this site.