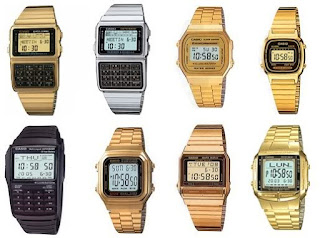 Clocks must be one of the most ho-hum pieces of technology in our modern techno-overwhelmed world.  So cheap that they are absolutely everywhere.  So everywhere that we forget they even exist.  But clocks used to be fantastically precious pieces of high technology, the culmination of all the mechanical genius of their time.

Today we'll be looking at five clocks that will remind you how cool telling the time actually is.


Drip Drop Instead Of Tick Tock Time-keeping started when people watched the progress of shadows on the ground.  It just makes sense.  Should be easy.  Okay!  Blog post finished guys, everyone go home!

Except there's a problem with solar clocks.  Let's say that you want a particular event (religious ritual; bacchanal) to last the same amount of time every single day.  You stick a pole in the ground and mark the shadow cast at the beginning of the event, and then mark the shadow cast at the end of the event.  The next day you just start when the shadow hits the first mark, and finish when the shadow hits the second mark.  Problem solved, right?

Wrong.  You're forgetting that the sun rises and sets at a slightly different time every day, so the positions of those shadows will change as the year does its always going forward thing.

The water clock is an ingeniously simple solution to this problem.  Here's how it works:
The earliest water clock was found in the tomb of Pharoh Amenhotep back in 1500 B.C--it's the big jug thing pictured above.  But the water clock continued to be a useful way of keeping time for another three thousand years. 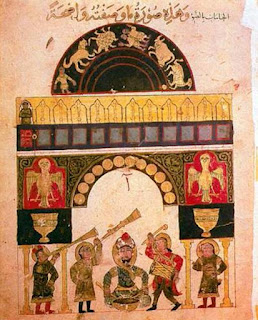 The water clock reached its finest expression in the Muslim scholar al-Jazari's book called Book of Knowledge of Ingenious Mechanical Devices published in the beginning of the 13th Century.  In this tome al-Jazari describes the Castle Clock, a water-powered clock which had so many special features it was like a 12th Century Casio.  Not only did it show the time.  Not only could you reprogram the length of the hours to account for the changing seasons.  Not only did it show the position of the zodiac.  Not only did it reveal one of five musical mannequins every hour.  But the thing had two falcon robots that would drop a ball into a vase.  Take that, iPod. 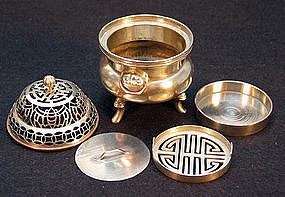 Of course, no matter how advanced your timepiece is, you're not going to be able to actually tell the time unless you can see the timepiece.  This was a problem during that long era before light-switches.  If you happened to want to know what time it was at night, you had a problem.

But for every problem there's a solution.  The genius of nocturnal time-keeping was enterprising French inventor called M. de Villayer, who created a spice clock.  The hour hand of the clock would point to a bowl of spices--a different one for every hour.  You followed the hour hand with your own hand, dipped a finger in the appropriate bowl, and literally tasted the correct time.

But like all great European inventions, this one was anticipated in the east by a good number of centuries.  Starting in the 10th Century the Chinese made incense clocks like the one pictured above.  These held specially calibrated sticks of incense known to burn at a particular rate.  The first hour would smell of sandalwood, for instance, and the next of cinnamon.  Instead of a sideways glance at your wrist-watch all you needed to do to tell the time was sniff.


Too Useful For You? 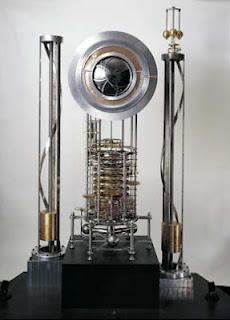 The clocks we've seen today are all built on a human scale.  If I know anything about my decadent readers it's that you want something a little bit more impractical.  Well our final clock is so lacking in applications, so abstract in conception, that it must stand either as one of the coolest things on earth--or one of the dumbest.  Or both.

Buried deep in a mountain in Texas, the 10,000 Year Clock will tick at the speed of continents drifting. It will tick once a year for ten-thousand years.  Why?  The short answer:  because.

Mock all you want, but I find the long answer is inspiring.  Our lives--everything that we ever will know and feel, every terror and every heartbreak, all the love and all the trouble, the sum of this incredibly important biological lump I call me--it comes to only an instant in the turning of the universe.  We are here, we proudly beat our chests--and then we are gone.  And it's staggering to think of how much time there has been before us, and how much time will indifferently move on after we are gone.  Around us the stars grind on, the arms of our galaxy slowly spin, our planet changes--and to those slow movements, does a me or a you really amount to much?  The 10,000 Year Clock stands for me as a metaphor for one of mankind's greatest virtue:  our ability to step up on our tippy-toes and look beyond our cramped perspective, seeing what lies beyond--the proud mountains washed away by ten thousand years of rain, the lakes dried by a hundred years of sun--the ape evolve into a man.

This post was inspired by the In Our Time episode on the Measurement of Time, which might be one of the finest forty minutes of erudite discussion I have ever had the pleasure of listening to.

A note:  surprisingly little documentation exists about the spice clock.  The only source I could find of it is a book by Carlo Cipolla called Clocks and Culture.  Check it out if you are interested.
Posted by Unknown at 7:51 AM