Of Barks And Bites 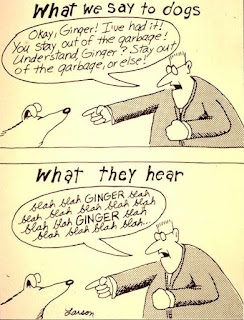 Dogs have been living with humans for at least 14,000 years. In this time the dog has picked up some human traits.  Number one is a capacity for joint attention.  This means that a dog can look at what you're looking at, and know that you're looking at it, too.

Simple, right?  Wrong.  Most animals--even our closest relatives like chimps and dull uncles--have only a tiny capacity for joint attention.

At Harvard Brian Hare tested the joint attention of chimps, wolves and dogs by hiding food in a container and having the creature guess where the treat was.  The trick of this experiment was that the experimenter stayed in the room with the animal, hinting vigorously towards the correct container--either by tapping it or staring at it.  Dogs--even puppies--could follow their human friend's attention to find the treat.  Chimps could not, and neither could wolves.

But while the dog curls at humanity's collective feet as we read our collective newspaper, we must sometimes wonder--what really goes on in that floppy-eared head?  What dog-dreams make dog legs twitch?  What dog words are dogs saying when they bark?

Bad Dogs
In an elegant experiment, Alexandra Horowitz at Barnard University in New York has figured out a way to peek into doggy brains.  Her subject is this. 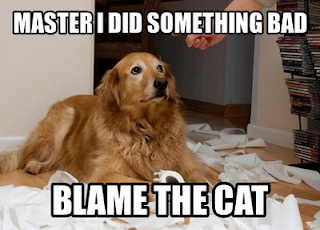 This is the guilty look.  It is as common a pose in dogs as it is in humans when--in our roughs and tumbles--we happen to break a mug, or eat every piece of chocolate in the house even though we are told not to.  To figure out whether dogs are actually feeling guilt when they look guilty, Horowitz lied.

But Horowitz told all the dog owners that their dogs had eaten the snack against their master's prohibition.  Predictably, the dog owners scolded their dog.  The dogs responded with the guilty look.

But all the dogs displayed the guilty look--even the dogs that hadn't eaten the forbidden treat.  This suggests that the dogs weren't feeling what we would call guilt--that is, remorse at doing something wrong.  How can you be guilty of something you have not done?  What we see as guilt in dogs must be some other kind of emotion--submission in the face of an irate master, perhaps?  A cringe at being yelled at?  But not guilt.

This is an enticing hint that what happens in doggy brains is different than we imagine.  But it is only a hint.  Now we will turn to the doggy bark.


Bark and Bite
Every dog on the planet barks, from Alaska to Australia.

But there is mystery, even in this truism.  While dogs bark, adult wolves don't.  This suggests that the bark is something essential that separates dogness from wolfness.  Sometime in the very earliest period of dog-development, dogs who barked were heavily selected for.

But the question is, why?  Barking is no good for hunting.  A bark--no matter how well-timed--just alerts your prey that you are coming.  And it's not like early humans enjoyed the sound of dog barks, even though they couldn't get the latest Okkervil River album.

It could be that dogs were neolithic security alarms.  Ancient humans might have put dogs on the outskirts of their camps, using their bark as a signal that a stranger was approaching.


Coda
And yet, for all this trouble trying to figure out the essence of dogginess, Pixar said it best.


My main sources for this post were Brian Boyd's On The Origin of Stories and Nicholas Wade's Before The Dawn.

Email ThisBlogThis!Share to TwitterShare to FacebookShare to Pinterest
Labels: Before The Dawn, brian boyd, dogs, Dug the Dog, evolution, learning today, Nicholas Wade, on the origin of stories, Pixar, psychology, science, Up