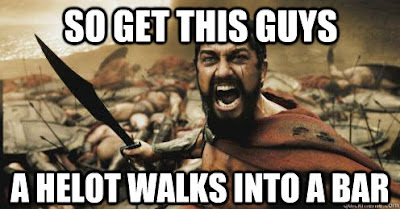 The past is a broken, forgotten thing. We have only small pieces of it, which, with some effort, we might stick together roughly. Then we might find the shape of the past--but not its color, or heft.

Just think of this:  We have lost nine-thousand-nine-hundred-and-ninety-nine jokes out of every ten-thousand that have ever been told.  That means someone sometime has told the funniest joke in history.  And we can't laugh at it anymore.

But even if all the jokes of antiquity were preserved, we might not be able to understand them.  What will make one person laugh until they cry will make another merely scratch their head.  So much more with the wit of the ancients.

Plutarch admires the Spartans for their dry, restrained wit.  Though the jokes he records do not exactly leave you rolling on the floor, laughing.


One day a Spartan was invited to hear a man imitate the nightingale.  He said: "I won't waste my time.  I have heard the bird with my own ears."

Another Spartan, seeing men seated on stools in a privy, said: "May I never sit where I cannot give place to an elder."

Could you stand a third?

A youth, when someone promised to give him game-cocks that would die fighting, said, "Don't do that, but give me some of the kind that kill fighting."

If you want some more very old jokes (including some that are actually funny), check out this post about the world's oldest jokes.