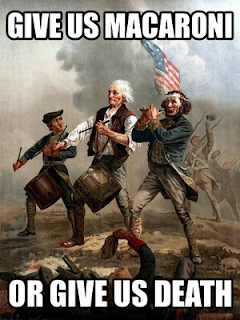 Often traditions are like a culture's vestigial organs--atavistic throwbacks that once held purpose and meaning but now just do nothing better than dangle.

Earlier on this blog we explained how carrying a bride over the threshold originated from an ancient Roman rite symbolizing nuptial kidnapping.  Today, we'll be dissecting another beloved institution.  This one is as American as apple pie.

Well today we will tell you.  Get ready to call your parents and let air any long-simmering song-lyric-based resentments.

Yankee Doodle probably started out as a national insult.  In the 1750s, British troops fought the French and Indian war alongside their ruder American cousins.   The British troops would tease their backwards American brothers-in-arms by singing Yankee Doodle.  The Americans were dogged by the song--feisty British troops even going so far as to sing the song during church services.

But what did the arrogant British sing?  The early years of the song is wrapped in veils of mystery, put into a box of obscurity, sealed up with tape of confusion, and then filed in the library subbasement of silence.  No one knows where the tune came from (though it is likely from a nursery rhyme called Lucy Locket) and the lyrics were only written down in 1775, a full quarter of a century after the song is supposed to have been written.

But even then it wasn't very flattering to the colonists.


Brother Ephraim sold his Cow
And bought him a Commission;
And then he went to Canada
To fight for the Nation;

But when Ephraim he came home
He proved an arrant Coward,
He wou'dn't fight the Frenchmen there
For fear of being devour'd.

The nature of the song changed during the Revolutionary War.  The American soldiers started to sing the song before battles, turning what had once been a national insult into a swaggering defiant stand against colonial arrogance.  Here's a newspaper account that came out a month after Lexington and Concord:

Upon their return to Boston [pursued by the Minutemen], one [Briton] asked his brother officer how he liked the tune now,-- 'D--n them,' returned he, 'they made us dance it till we were tired.' -- Since which Yankee Doodle sounds less sweet to their ears.

So what does the song actually mean?

The song--at least the famous verse that we all know--seems to be about a foppish young colonist putting on airs too fashionable for his backwoods upbringing.  He--foolish young thing--thinks that to impress the ladies all he has to do is to stick a feather in his cap.  That is what is takes to be macaroni.

By the middle of the 17th Century, the word macaroni had become a synonym for over-the-top style.  But why should a penchant for crazy duds be associated with elbow-shaped pasta?  Because of rich young men going abroad.  After returning from their expensive grand tours of Italy, young British dandies were said to have developed a taste for that most exotic of pasta shapes, the elbow.  Some even dubbed themselves unofficial members of the Macaroni Club.  You know--for people cultured enough to have tasted macaroni.

Now only a single mystery remains.  What's a doodle?  Some say it means fool.  But here--we strike the bedrock of thought and history.  Our spade is turned aside.  We can dig no more.

But wait!  There is more!  We have a single fact left!  According to some, doodle might have been the origin of our much-used term for everyone and everything dude.

Well fellow dudes, I hereby propose that we bring macaroni back as a term of overly exuberant style.  Now we must only wait for that lovely day someday surely in the future, when a fine young Atlana MC rhymes macaroni with honey.

My main source for today's post is the always informative Straight Dope.