In Soviet Russia, Punchline Laughs At You 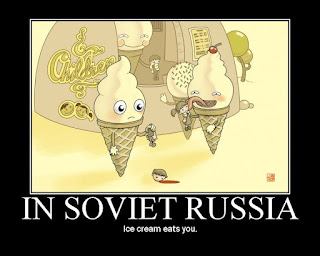 The dead do not laugh.  Everyone else does.  Earlier this year, we talked about the legendary humor of the Spartans and the world's oldest jokes.  Today we'll be talking about jokes so funny they could get you sent to the Gulag.  We're going to delve into the humour of Stalinist Russia.

Many of the jokes had to do with the Stakhanovites--workers who achieved supernaturally high production levels, becoming a legion of pseudo-celebrities.  Often Stakhanovites would get special privileges and gifts.


Four Stakhanovite milkmaids were getting prizes at a public ceremony.  The first got a radio receiver.  The second got a gramophone.  The third got a bicycle.  Finally the fourth came onstage, the leading pig-tender of the whole kolkhoz.  The audience held its breath.  Wiping tears from his eyes, the kolkhoz director shook her hand with great pride.  "I present to you the collected works of our beloved comrade Stalin!"  Silence.  A voice peeped up from the back of the hall.  "Just what the bitch deserves."

Others had to do with the tension that came from the suddenness of soviet-style repression.


"Did you hear that Petrov's been shot?"
"Nonsense!  That's Petrov himself walking on the other side of the street!"
"Yes, he hasn't heard yet."

Fear might make us try to stifle our laughter, but a few snickers always get out.  Here's another.


1937.  Night.  A ring at the door.  The husband answers it nervously.  He returns to his wife, glowing with relief.  "Don't worry, darling.  It is only bandits who have come to rob us."

Finally, jokes can offer us a way to imagine hope in a hopeless situation.


A riddle:  Stalin, the entire Politburo, and their whole entourage are on a steamer going down the Volga.  If the steamer were to sink, who would be saved?
Answer:  The peoples of the USSR.

My sources today were Sheila Fitzpatrick's Everyday Stalinism and Political Humour Under Stalin, edited by Michael Brandenburger.
Posted by Unknown at 2:13 PM