The Arm That Wasn't Paralyzed 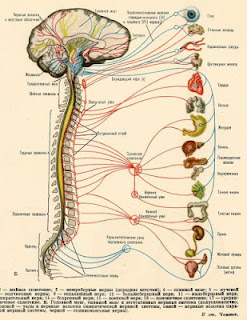 An intelligent, lucid 60 year old named Nora was interviewed by the neuroscientist V.S. Ramachandran.  Ramachandran tells the story in his book, the Tell-Tale Brain.

Nora's left side is paralyzed.  But she won't admit it.  This is a more common phenomena than you'd think.  After suffering a stroke in the right hemisphere of the brain, many people suffer paralysis of the left-hand side of their bodies.  About one in twenty of these people will insist that they are not in fact paralyzed.  This is called anosognosia, which is medical-speak for denial-of-illness.

Anosognosia does not necessarily go along with any other mental impairment.  A person can be psychologically completely normal in every respect--except when it comes to the inert mass of their paralyzed left half.

A notable sufferer of anosognosia was Woodrow Wilson who became paralyzed in 1919 after being smitten with a flu-related.  He was bedridden, blind in his left eye, and paralyzed on the left side of his body.  He remained in office, even as he was on the brink of death, mumbling limericks to himself, his wife serving as his 'steward' (read: regent).  He didn't attend any cabinet meetings for a full half year, and when he finally presented himself to his cabinet, his staff were shocked at the frail state of his heath, and at the secrecy which had covered it up.  But Wilson grew angry with any mention of his incapacities, and fired many functionaries who dared suggest that there was something wrong with him.  He even pondered running for a third term.

Anosognosia can come in many exotic flavors.  Some anosognosiacs will refuse to admit that other paralytics are paralyzed.  A syndrome called somatoparaphrenia often accompanies anosognosia, in which a person will deny all ownership of their paralyzed arm.  Nora, mentioned above, had somatoparaphrenia.  "Whose arm is this?" Dr. Ramachandran asked her.  "That's my mother's arm," she replied.  "Where's your mother?"  "She's under the table."

People can be anosognosiac about more than just paralysis.  Patients with Wernicke's aphasia--brain damage which limits their communication to a fluent stream of babble--are often anosognosiac about their condition, nodding and smiling and talking even though they have no content to their speech.

Sources today are V.S. Ramachandran's the Tell-Tale Brain, and Errol Morris' five-part blog post on anosognosia which is fun, philosophical, and exhaustive--not words you usually associate with five-part blog posts, I know.
Posted by Unknown at 6:37 AM