Three Things The Ancient Olympics Can Teach The Modern Olympics

The Olympics started in the seventh century before Christ, when young women completed a footrace to see who would become a priestess of Hera.  From these humble beginnings, the Olympics became the foremost of the four pan-Hellenic games, a ceremony so important to the Greek-speaking world that truces were called in order for athletes to arrive at the games safely.

These Olympics were not the familiar biennial show-case of brute physical competition that we know and love.  The race with the Olympic torch--now so engrained in our image of the Olympics that is has become a synecdoche for the festival--was an innovation brought in by Hitler in the 1936 games.  The gold, silver and bronze medallions replaced the traditional reward of an amphora of olive oil and a sprig of olive.  In the translation between ancient celebration and modern spectacle, some important aspects of the competition were lost.

Today we'll look at three aspects of the Ancient Olympics I think should be returned to the modern Olympics. 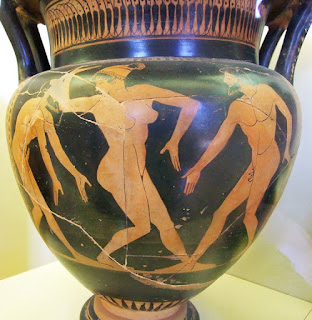 The first is Athletic Nudity.  The Greeks competed buck naked, slathered in olive oil.  The origins of this practice are murky.  Thucydides said that the Spartans "were the first to bare their bodies and, after stripping openly, to anoint themselves with oil when they engaged in athletic exercise."  Other sources point to the Athenians, whose government, after a guy tripped over his shorts while running, decreed that all sports should be conducted naked.


The explanation for the nakedness, according to John Mouratidis, was to either to "inspire fear or horrify their enemies."  He quotes L Bonafante suggesting that Hellenistic nakedness resulted from the "apotropaic use of the phallos, gestures against the evil eye, etc."  That et cetra is enticing--what other apotropaic uses can the phallos be put to?  But we must move on.

My reason for advocating a naked Olympics is transparent.  No one worries about the evil eye anymore, and there have been no notable short-tripping incidents in any Olympics I can remember.  But I think that athletic nudity would make the games more entertaining, more beautiful, and more exciting.  Especially the pommel horse.

The second ancient innovation is Pankration, which is Greek for "savage unrelenting beat-down."  Actually it is Greek for "all powers."  Pankration was a mix of boxing and wrestling, whose rules were easy to learn but hard to master.  Two men squared off against each other, trying to inflict so much pain against his opponent that he would submit by holding up his index finger.  The fighters could do anything to inflict this pain--barring biting and the gouging of the eyes, nose and mouth--and while they did not have weapons, in later years, the pankratiasts wrapped their fists with leather and metal.  You heard right, they could do anything.  They could kick the stomach or the testicles, they could inflict chokeholds and armlocks and brutal throws.  Many competitors died.

Pankration produced its heroes.  One man won a match even though he was dead.  Arrachion of Phigalia was in the Pankration finals for the third time running, and after an evenly-fought bout his opponent held him in a neck hold from which he could not escape.  Arrachion's trainer called out "What a fine funeral if you do not submit at Olympia!"  With that, Arrachion twisted his body around, kicking his opponent's foot, breaking it.  His opponent, in unbearable pain, gave up the match.  But Arrachion had broken his own neck and lay there, dead.  His limp head was donned with the laurel leaves of victory, and he became a legend across Greece.

Modern-day Mixed Martial Arts (or MMA) is similar to Pankration.  The sheer undaunted brutality of these competitions should be enough to inspire the "pity and fear" that Aristotle said good tragedy should inspire in us.  So why not let it become an Olympic sport? 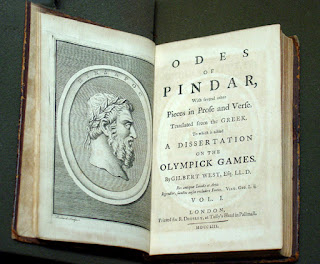 The third innovation that the ancient Greeks can give the modern Olympics is not as cool as nakedness and bloodthirsty lawless death-matches.  It's poetry.

The ancient Olympic Games were closed by a competition among poets to see who could best praise the winning athletes.  These poems, called epinicians, were dreadfully popular, and have survived thousands of years.


In the modern Olympics, art competitions were held from 1912 to 1948, for sport-inspired architecture, painting, sculpture, music, and literature.  The competitions were called off because, in the opinion of the Olympic committee, the artists were all professionals.  The 1952 Olympics in Helsinki boasted a non-competitive art show, but without the agony of struggle, victory and defeat, the artistic side of the Olympics sputtered out.

Modern art is moribund, sealed air-tight in an ivory sarcophagus of academic rigor and bloodless cerebral muttering.  Our generation might be one of the first in human history for which poetry has no popular charm--and the fault is the poets, who insist on being daringly arty, when they should work to be beautiful.  A poetry competition celebrating the accessible agony of athletic competition, done in all the languages of the world, would help a little in giving feeling back to poets.
Posted by Unknown at 8:26 AM

I've just installed iStripper, so I can watch the hottest virtual strippers on my desktop.