Two weeks.  One country.  Five people.  Three thousand kilometers.  Three pairs of sunglasses lost.  Sunscreen.  Goats.  An excessive number of kebabs.  And as many historical monuments as a land settled for over twelve centuries could throw at us.

If you're into that sort of thing, you can read the diary on your e-reader of choice. 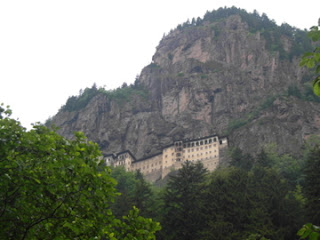 Day One: Trabzon and Sümela Monastery
In which our heros assemble and visit a monastery clinging to the side of a mountain.  Also, impromptu mountain dancing.

Day Two: A Lesson In Turkish Automotive Adventure. Afterwards, Erzurum.
Our heros brave the Turkish roads, heading to the city Erzurum where they find a madrassa, and three kumbats.  They also figure out what a kumbat is.

Day Three: Scavenger Hunts For Car-Bound Tourists.
Driven crazy by boredom, the adventurers play a scavenger hunt in the car.  Spoiler alert:  the winner of this game is this blogger's girlfriend, who always wins everything. 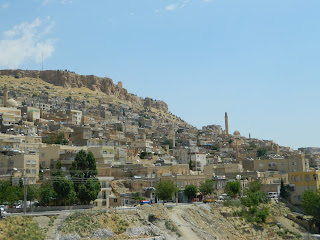 Day Four: Mardin, Too Marvelous.
The heroic travelers venture to the hilltop town of Mardin, overlooking the Mesopotamian plain.  This is pretty marvelous. 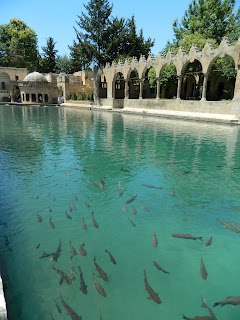 Day Five: Urfa, A City Of Pilgrims, A City Of People.
The birthplace of Abraham.  Cannibal fish.  Columns.  A spice market.  What more do you want from your travel writing?  Bears?  Well there are no bears.  Tough luck. 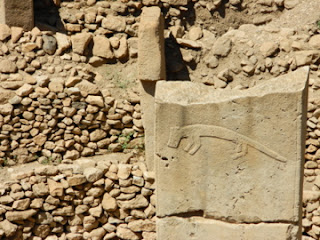 Day Six: Gobekli Tepe To Gaziantep, The Old To The New.
The heros find the oldest temple in the world, and then see a lot of mosaics.  Because they're cool like that. 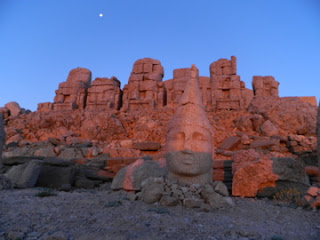 Days Seven And Eight: Roads. The Decapitated Gods Of Mount Nemrut. More Roads.
Sunrise over the tomb of a once-great king is sandwiched between a ton of driving.  In an excised scene, the heros are ripped off by a hotelier who looks like a mob boss gone to seed.  But you have to use your imaginations for that, because this scene has been edited away, in favor of the more picturesque bits of travel more appreciable by the masses.  Also, a whimsical ranking of Eastern Turkey.


Day Nine: The Mysteries of Cappadocia, Unanswered and Beautiful.

The province of Cappadocia is incredibly beautiful, and the heroes join other tourists in appreciating this beauty.

Day Ten: Beneath Cappadocia.
A venture into an underground city leads to a discovery--underground cities are dark and a little scary.  But mostly dark.


Day Eleven: Konya. Rumi. Peace. Tourism.
The city of Konya is a site of pilgrimage and veneration and high school field trips and grumpy old ladies.


Day Twelve: Sunburned Myth: Pamukkale and Aphrodisias.
The heroes venture to two sites of world-heritage-worthy beauty and wonder, and get hideously sunburned in the process.

Day Thirteen: All Inclusive, Wi-Fi Extra.
Taking a break from cultural-minded explorations, the travelers check into an all-inclusive beach resort, where they feel alienated, drink too much, and end up winning a bottle of wine in a contest of stupid tricks, then leave, half-thinking that none of it even happened.

Day Fourteen: The Day Of Ruins. Ephesus And After Ephesus.
Pro-tip:  Ruins described in this section are a metaphor for how the travelers felt after two solid weeks of beauteous sight-seeing.  Also there are real ruins.  The approach of civilization is symbolized by a Starbucks at a road-side strip-mall.
Posted by Unknown at 5:14 AM