This is day four of the Amazing Awesome Anatolian Road Trip Diary.


Mardin clings to the side of a mountain, looking out over the Mesopotamian plains and the meander of the Tigris below.  But Yenishehir—the New City where our hotel was—hides behind the old city on the easy flatland, a wealthy spread of new apartment buildings and restaurants.


A five minute drive brought us to the base of the old city, and we stepped out of the car to admire a view of the bread crust-colored buildings and the crowning mass of the citadel that stood at Mardin's peak. 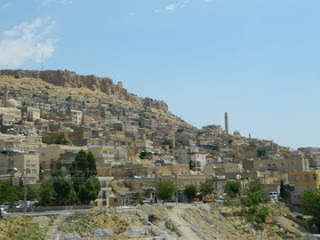 Local legend has it that Mardin was founded before the Great Flood.  The earliest archeological excavations date the settlement at least back to 6,000 years ago.  And it’s easy to see why people wanted to live here.  The plains keep you fed.  The mountain keeps you safe.  It is a wonderful place to build a city.

But the mountain could not keep Mardin safe forever.  And over the long history of war and empire, generations of generals have stood on the Syrian plain below Mardin and looked up, lustily envying the strategic brilliance of this mountain town.  Here are the names of the civilizations which have conquered Mardin, one after the other: the Subarians, the Hurrians, the Elamites, the Babylonians, the Hitties, the Assyrians, the Romans, the Byzantines, the Arabs, the Seljuk Turks, the Artukids, the Mongols, and then finally—in the 16th Century—the Ottoman Turks who themselves were replaced by the Turkish Republic in the beginning of the 20th Century. 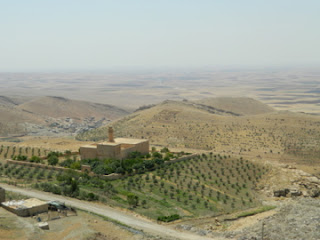 We turned from the city to the Mesopotamian Plain behind it.  After driving through the hilly plateau for so long, the flatness of everything was stunning.  The plain stretched to the horizon utterly untroubled by hill or rise or roll, completely flat, squares of wheat-colored farmland broken by squares of dark irrigated land, dark cloud shadows moving slowly from one end of the plain to the other.  The dusty horizon joined with the sky in an indistinct haze, like the world couldn’t exactly decide what should be land and what should be sky.

We climbed up alleyways of stone steps, the roofs of the city rising above us at various angles, two or three nipple-tipped minarets piercing the skyline in the distance.  These streets were not made—they grew up over the slow course of decades and centuries, going where they would—not necessarily going straight to anywhere in particular—but just going.  And so we walked without any other direction but up, marveling at the ancient-looking character of the buildings around us.

Mardin looked exactly how I imagined an ancient Near Eastern city should look.  The houses were old, with finely-made arched Ottoman windows, clustered together like mushrooms.  Many were in various stages of disrepair:  cracked walls, gaping windows.  We passed under a drooping stone balcony supported dubiously by a nest of wooden planks and plastic pipes.  “Careful of the scorpions,” our Turkish friend told us as we stumbled up through a pebbly patch of waste land.  It was easy to imagine that we were back in the Twelfth Century. 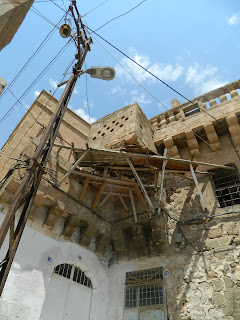 But then small details would force the modern world back:  spent Cheetos bags fluttering in the street, the sound of a Turkish soap opera blaring through an open window of an ancient-looking house.

An exceptionally happy young man on a donkey strolled by us.  Polite girls in loose headscarfs said hello to us.  We said hello back and followed them to the nearby mosque,—the Abdullatif Camii.  There were a gaggle of girls in the mosque’s front courtyard lingering under the shadow of a vine trellis, asking us questions and giggling.  After a few minutes a young woman peeks her head out of an open door and announced “Girls!  It’s time!”  The girls are enrolled in a summer Koran course at the mosque.  But the girls dawdled as much as they could, asking us foreigners our names, laughing, posing for pictures and then running away from pictures and hiding their smiles behind their hands.

The mosque was old, the outside decorated with beautiful clay work in the Artukids style.  We ventured inside the mosque, and look around for a moment before heading out again into the dry desert heat. 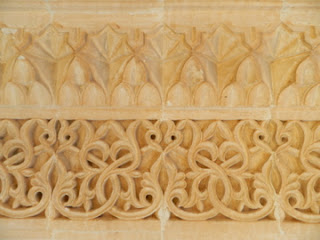 We came to a main street, hung with plastic awnings, blaring with staticy radios barely picking up ancient music, vegetable sellers sitting at their shop doing their accounts by hand, and somewhere in the distance the anxious braying of a donkey.  The feeling washed over me again:  this could be a hundred years ago, or a thousand.  Or it could be today.

And then I realized I had been wrong about Mardin.  Being in Mardin was not like being transported back in time.  Instead it was like being smeared through time, at once living in the present and the past—as if time which normally is so punctilious and fussy had gone sloppy and forgetful.

There are things to do in Mardin, important cultural landmarks that the guidebooks insisted we check off our lists—but it was more rewarding to simply fall through the alleyways and let ourselves get lost in the remarkable feeling of the city.  Nevertheless, we were tourists, and so we had to do touristy things.

First we went to the Mardin Museum, which boasted artifacts from the area’s six thousand years of human settlement.  Looking into the glass cases showing paleolithic tools, I felt a sense of sadness.  Because what survives from the ancient world?  Clay and metal and nothing more.  Stone axes, broken shards of curde jugs, small statues, thin metal needles, a stone toy cart, obsidian cutting tools still sharp after six millennia, baked clay writing tablets and seals—and nothing much more from the clamor of human life.  A few small cuneiform inscriptions show the grubbily commercial origins of writing.  They are nothing more than contracts, announcements, statues, and deeds.—They come from before the time that writing had become art.  I wondered what would survive of our life, after the centuries pulled their forgetfulness over our civilization?

After the museum, we tried to find Ulu Camii—the Great Mosque.  We were directed down a merchant-clogged alleyway selling an oriental range of sundries:  sheep and calf heads in plastic bowls, black with rot, flies buzzing around the eye sockets; repair shops and metal workers, a ten-year old fixing a saw blade onto a machine tool; a metal worker stamping patterns onto a plate by hand; cages full of ducks and baby chickens, squawking; cookware, plastic pipes, woodworking tools; kebab restauranteurs carving off slices of meat; tea shops; clothes shops; anything a person might need.

We got to the mosque a few moments before the call to prayer, and the broad courtyard was filled with locals washing their feet in the fountain.  We decided to wait in a nearby cafe until the prayers were over.  There we looked out over the Mesopotamian Plain again and drank Mirra Coffee—the most bitter sip of coffee that I have ever had in my life.  A serving is little over two or three teaspoons, and the taste stayed in our pallets for at least half an hour.

Our refreshment done, we visited Ulu Camii, remarked about in guidebook after guidebook.  But after having enjoyed the city for the majority of the afternoon, I was disappointed by how boring the great mosque was.  It was a large mosque made of white stone, decorated in high Artukid style, the walls crawling with amazing calligraphy.  But the inside of the mosque was bare and cool, and I couldn’t feel excited for it.  We splashed water over our faces at the fountain, and then left to again plunge into the city.

Our final act of tourism was to climb to the top of the city where the Mardin citadel perches, looking over the Syrian farmland.  We rested there, snapping photos of ourselves against the grand backdrop of the valley where civilization began. 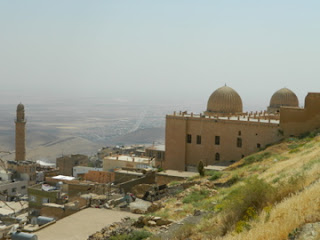 We had planned to do more around Mardin:  we would find a city where an ancient bridge crossed the Tigris river; we could tour a working Syriac Christian monastery; we could admire an ancient mosque.  But once we got back into the car, we shrugged off all our remaining touristic plans.  We didn’t want any more cultural heritage:  we had had enough.  We were full of beauty already, and full of wonder, and our camera full of pictures.  Insisting on seeing more striking sites would be too gluttonous.  Instead we followed the wide new road west, to the city of Urfa, some three hours away.

You can also get the whole series as an e-book.