What's The Deal With Airplane Food? 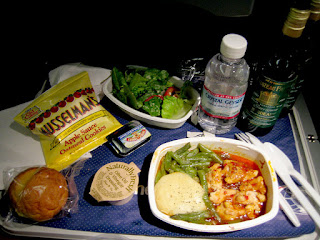 It turns out that it's not just the food that's the problem, but everything else on the airplane.

The first culprit is the cutlery.  To save gas, airlines use light-weight cutlery.  But humans turn out to be very picky eaters, and we significantly prefer food that we shovel into our mouths with heavier cutlery.  Since airplanes serve us low-weight cutlery and trays, our meals end up tasting a little weird.

When the Concorde was still flying, British Airlines spent months developing the perfect lightweight cutlery set, one that would befit the clade of air passengers rich enough to afford a berth on the super-sonic luxury airline.  They made a fantastic set out of titanium.  Then they tired them out on the population.  People hated eating with them.  They were just too light.  It seems that when you spend a bundle on a plane ticket, you expect your knife and spoon to have a certain heft to it.

The next problem is the air--specifically the low humidity, low air-pressure, recirculated, germ-laced miasma of an airplane cabin.  At ten-thousand feet about a third of our taste buds switch off.  At thirty-five thousand feet the humidity in the cabins is kept so low that our mouths start to dry out.  When we vainly chomp on our in-flight meals and taste styrofoam, it's more the fault of our mouths than our meals.


Man It's So Loud In Here

The final piece of the puzzle is the noise.  The airplane cabin is a hideously loud environment.  Not only do you have the ambient chatter of a few hundred people jammed into a small tin-can, but you also have the whine of the recirculating air, and the drone of the engines.

A noisy environment significantly effects our taste.  When it's noisy, salty and sweet tastes don't taste as salty and sweet.  So the taste of our in-flight meals have literally been droned out by the sound of our next-door neighbor snoring.

Because of these three reasons, airplane food tastes bland, limp, and lifeless.  Airlines try to remedy the problem by serving us flavorful, salt-bombed meals, but the problems of eating in an airplane environment are just too much for a glass of dry red wine to remedy.

The next time I hear someone complain, however, I'm going to remind them that for all the indignities of air travel, it remains a lot easier than the alternative--going by boat.

I learned about this from neuroscientist Charles Spence, a guest on Dr. Karl's call-in show
Posted by Unknown at 7:28 PM