A Pipe A Day Keeps The Plague Away 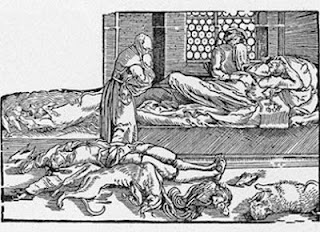 17th Century summers were seasons of plague.  Those rich enough to escape left the cities for the countryside.  Those who couldn't escape waited, fearful that soon they too would have to paint the tell-tale red cross of the plague on their doors, and watch their family be consumed by the pestilence.  Autumns sometimes fell with one in seven Londoners dead.

Bubonic plague, spread by fleas on the body of the black rat, is one of the most painful diseases observed on our sweltering earth.  Buboes--big pus-filled lumps--form around the lymph nodes in the neck, underarm and groin.  Sometimes they even explode.  Other symptoms range from fever to gangrene.

All the glories of 17th Century medicine were brought to cure the plague.  One of the most exciting panaceas touted at the time was a new miracle herb from the New World.  Think of it as the acai berry of the 17th Century.  It could cure migraines, toothache, worms, bad breath, cancer, lockjaw, and even poor fingernails.  Best of all--it tasted great!

Beloved diarest Samuel Pepys writes of prescribing himself the miracle cure after seeing a plague house:


This day, much against my Will, I did in Drury-lane see two or three houses marked with a red cross upon the doors, and "Lord have mercy upon us" writ there - which was a sad sight to me, being the first of that kind that to my remembrance I ever saw. It put me into an ill conception of myself and my smell, so that I was forced to buy some roll tobacco to smell to and chaw - which took away the apprehension.

Yes, you read right.  During the 17th Century tobacco was considered medicine of the highest potency.  Some students at Eton were punished for not smoking.

The idea wasn't as crazy as it sounded.  The best-educated doctors of the time believed that the plague was spread by bad air.  Accordingly a lot of preventative medicine had the same character as potpourri:  replace the bad smells with good ones.  Doctors carried poultices, herbs, vinegar and masks--all to reek away the bad air.  Tobacco smokers, cloaked in a billow of non-pestilent smoke, were thought to be especially protected from malodorous vapors.

The other cures for plague out to be as effective as smoking a bowlful of tobacco.  Plague was caused by fleas, not noxious odors, so even the most expensive pot pourri was completely ineffective.  The best thing you could do when plague season came?  Run.  Run far away.  And don't keep pet rats.

My inspiration for today's post is the fantastic Shakespeare's Restless World episode, Plagues and Playhouse.
Posted by Unknown at 7:23 PM