The Amazing Story Of The Six Thousand Year Old Earth 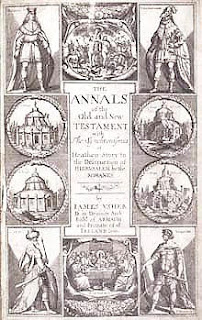 On the seventh day of the Scopes 'Monkey Trial' the examination turned to the age of the universe.  The lawyer Clarence Darrow asked the politician William Jennings Bryan if he believed that the world began in 4004 B.C.  "That has been the estimate of a man that is accepted today," Bryan answered.  Darrow pressed Bryan.  Was this number, Darrow asked, based on the calculation from the "generations of man?"

William Jennings Bryan is no artifact of the past.  As of 2010 about four in ten Americans think that the earth is less than ten thousand years old.  Many would say that the definite date of creation was October 23rd 4004 B.C.  Like Bryan, most of these Americans would be have a lot of trouble saying where on earth the 4004 B.C. number came from.

The date was fixed back in the 17th Century by a man named James Ussher, primate of all Ireland, based on biblical sources.  In today's science-sobered times we may sneer at Ussher's arrogance and folly--to think that we could discover the age of the universe simply by studying the books of the Old Testament!  But Ussher was no fanatic troglodyte.  He was a scholar, and his work stands as the culmination of a long intellectual tradition, one that was interdisciplinary, brave and rigorous--even if in the long arc of time it has been proven wrong.

The task facing Ussher and the rest of his co-chronologers is sometimes characterized as easy: simply add up the lengths the reigns of kings and patriarchs in the Old Testament until they match with a particular known date in the past.  But enough problems arose doing this to give even the most diligent modern professor a long pause and a thoughtful chin scratch .  And today we have Google.

The first glaring problem was that at the time there were many different copies of the Bible floating around in a confusion of languages and from a motley of traditions--and they disagreed about the length of particular rulers' reigns.  The Septuagint--the Greek translation of the Torah--added over a thousand years to the total reign length, compared with other versions.  Ussher and his contemporaries had to sort through the conflicting data of scrambled manuscripts and figure out which version of holy scripture was the right one.  Ussher decided to go with the Hebrew version.

We would hope that once this was done, the Bible would give us a long list of kings coming one after the other, so that we could use their reign-lengths much the same way dendrochronology uses the width of tree rings to fix the ages of wood.  The Bible does provide us with such a desired unbroken list of kings--but only up until the reign of Solomon.  After that the successions become confused by war, conflicting kings, and co-regents.  This was more work for Ussher, untangling the mess of deaths and wars and exiles in the kingdoms of Israel and Judah.

And then there is a gap of about half a millennium between Ezra and Nehemiah--the final books in the Old Testament--and the birth of Jesus, the first biblical event on which we can confidently fix a date in the current calendar.  (Jesus' birth turns out to be in 4 B.C., by the way.)  To figure out the exact length of this gap, Ussher had to turn to outside texts and match some dateable biblical event with a datable historical event, and then work forward.

To do this, Ussher found a concordance between a the exile of Jehoiachin and the death of the Chaldean king Nebuchadnezzar II.  Once done, Ussher could hop over to the much more complete Chaldean and Persian records, before finally squaring these records with Roman ones.  This alone is a monumental achievement of archival genius, requiring knowledge of Hebrew, Sumerian, Persian and Latin--and who knows how many other minor languages; the assemblage and correspondance of ancient archives, histories, and lists of kings; and the resources and perseverance to do this archival work when there were no Amazon, no airmail, not internet.

Only after doing this could Ussher proudly unveil his work, and the true age of the universe.  His book, the frontispiece pictured above, ran to over two thousand pages of closely argued prose.  It settled once and for all the age of man.

Only not once and for all.  Future generations of scholars turned away from books and to the mountains, gorges, and rivers that stood outside their windows, and they saw in the landscape evidence that the world was much older than Ussher could ever have guessed.  It would take tens of thousands of years for rivers to etch fjords, for mountains to lift from the crust of the earth, for the hills to be ground down by wind.

But Ussher's scholarly work became a piece of ammo in the culture wars because in the 18th Century copies of the King James Bible started to carry handy annotations based on Ussher's chronology.  Look right there, the pages begged you, Creation--Part One--4004 B.C.  Today most Bibles no longer carry these dates.  But the 4004 B.C. date lives on.

This post is heavily indebted to Steven Jay Gould's lively essay on Ussher.  It was inspired by the In Our Time Episode on the Age Of The Universe, which is serious brain candy if you are curious about the historiography of of how old everything is--and aren't we all?
Posted by Unknown at 7:21 PM