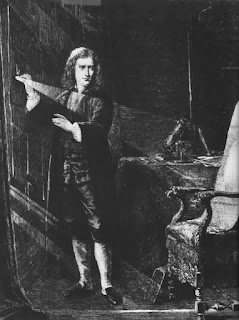 In the summer of 1665 plague swept through England, a country already wrecked by civil war and famine.  A young farmer's son named Isaac Newton traveled back to his family plot in Yorkshire to escape Cambridge, whose sweltering muck-splattered streets had become not only disgusting but deadly.  Instead of helping on the farm like his family wanted, Isaac retired to his room and delved into the mysteries of the universe, armed only with books, various scientific gadgets and his prodigious brain.  By the winter of 1666--still ensconced in his room--Newton was considered the one of greatest mathematicians in the world.  He was only 24 years old.

In addition to the whole theory of gravity thing and explaining circular motion, Newton turned his talents to an investigation of light.  Before Newton, people believed that sunlight was the among purest things in this crooked existance, as pure as God, and like God, impossible to reduce or to separate.  Newton had suspicions that this was wrong.

Newton got a prism, put it behind a cardboard screen with a slit in it, and waited for a beam of sunlight to pass through the prism at just the correct angle.  When it did, the prism scattered the light against the opposite wall into a rainbow of seven distinct colors.

This effect, while startling, was well-known.  It was believed that an impurity in the prism caused the pure white light to get rainbow-sullied.  What Newton did next to test this theory was the kind of thing that made Newton's name eternal.

If the rainbow effect of a prism was really caused by impurities in the prism, then it wouldn't matter what color light you fed into the prism--it would spit out a rainbow no matter what.  But if the prism was breaking light down into its elementary parts, then passing colored light through a prism should do nothing.  Newton positioned a second prism behind the first, and directed a single beam of colored light through it.

There was no change in the color of the light.  Newton moved the second prism so that inside the prism the rainbow was recombined into white light.  The prism could break light apart, and the same prism could put light back together.

Newton proved that white light wasn't really white at all, but instead a mix of seven constituent colors.  The greatest metaphor for simplicity and unity in the world turned out to be not to be as simple and unified as people had thought.

Not everyone was pleased with this result.  One of them was the German poet and erstwhile scientist, Johann Goethe, who lived about a century after Newton.  Goethe was more than just a dabbling science fan-boy.  After the publication of his famous epistolary suicidal novel the Sorrows of Young Werther in 1774, Goethe became increasingly fascinated by science, conducting a wide range of curiously innovative experiments, and in the 1780s, some of these encouraged him to believe that Newton was wrong about what color was.

One afternoon Goethe was walking through a garden, gazing at some yellow crocuses.  This is standard behavior for a Romantic poet.  But when Goethe looked away, he saw a purple afterimage of the crocus remain on his eye for an instant.  Something was going on with how we perceived color that we still didn't understand.

Goethe decided to repeat Newton's experiment with the beam of light and prism--but couldn't.  His beams of light wouldn't split into a rainbow unless the distance between the prism and the thing that the beam hit was great enough.  This convinced Goethe that the way Newton had been thinking about color was all wrong.

In 1793 Goethe started work on a book called Zu Farbenlehre (On The Theory of Colors.)  He would spend the next two decades pondering, experimenting, writing, and studying.  When he was finished, the book--now more properly defined as a tome--ran to 1,400 pages.  Goethe was pretty happy with the results.


I do not pride myself at all on the things I have done as a poet. There have been excellent poets during my lifetime; still more excellent ones lived before me, and after me there will be others. But I am proud that I am the only one in my century who knows the truth about the difficult science of color.

There are many differences between Newton and Goethe's color theories.  Newton has seven colors, Goethe six.  Newton arranges the colors in a spectrum.  Goethe has his colors in a wheel.  Newton thinks that light is made up of 'globules'.  Goethe thinks color comes from an interplay between light and shadow.

But the biggest difference between the two men is why they studied color in the first place.  Newton wanted to figure out what light was.  He wanted a scientific theory, one that was as sure as the truths of mathematics.  But Goethe was interested in color--color, not as something that existed outside of a person, but color as it was experienced:  the color of a friend's hair in the sunlight, the color of a butterfly's wing in a dim attic, the color of the afterimage of a yellow crocus in a poet's eye.

Time wasn't kind to Goethe's color theory.  His concept of the color wheel influenced some artists, most notably J.M.W. Turner, but he was ignored by scientists.  Wittgenstein wrote a notoriously obtuse essay about Goethe called Remarks on Color, concluding that:


Goethe's theory of the origin of the spectrum isn't a theory of its origin that has proved unsatisfactory; it is really not a theory at all. Nothing can be predicted by means of it. It is, rather, a vague schematic outline, of the sort we find in James's psychology.

This post was inspired by two radio shows, In Our Time's episode on Goethe and the Science of the Enlightenment, and the latest Radiolab on Colors.
Posted by Unknown at 3:54 AM