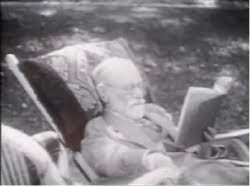 Freud was a suicide.

You can't blame him. First, he suffered from twenty years of painful cancer. (Sometimes a cigar is just a cigar. Other times it kills you.) Then, he had to escape from Nazi-occupied Vienna.

One day in his exile, he sat down, read Balzac's La Peau de chagrin (the Magic Skin) cover to cover, and then was administered an overdose of morphine. And he died.

Via Ivan Szelenyi's Foundations Of Modern Social Theory course, available on iTunes U.

Apologies for the lack of post yesterday, and the small post today. I am a tad busy!
Posted by Unknown at 9:23 PM