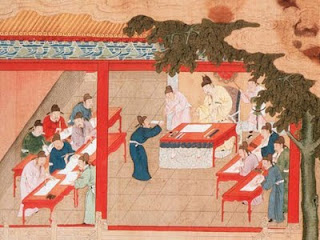 Welcome to Learning Today. I come across a huge number of facts in my daily procrastinating, and I thought--why not share those facts with the world? Or at least with the tiny number of humans and web-bots that read this blog?

Our inaugural bit of wisdom comes today from China's imperial examination system. Civil servants in Imperial China were chosen on the basis of their performance on a test. Hooray meritocracy, you say! Not so fast. This wasn't a test of actual practical things. This was a test of the Chinese classics. It was horrifically difficult. The leader of the Taiping Rebellion, Hong Xiuquan, failed his examinations over four times--despite scoring in the top one percent of applicants. People would spend their lives taking the exams. Makes GRE test prep look peachy, no?

Why were the exams so hard? For an example, look at the dreaded eight-legged essay. Not only did the eight-legged essay give strict limits on the word count, structure and expression, but it demanded that writers not mention anything that happened after the death of Mencius in 298 B.C. From Wiki:

That's what I call learning.
Posted by Unknown at 11:28 PM

It is very interesting topic! I am not good at writing, that's why I've to use writing services like http://essayforu.com/ to help me write my essay.

I’ve only tried one essay service but I can tell you that the website I used was really solid. It’s called DigitalEssay.net. Basically you get to pick a writer and you can communicate with them through an internal chat system which makes explaining how to do specific assignments a lot easier (especially if your teacher is a hard-ass like mine was.) Good luck with your paper!