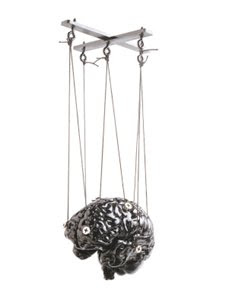 Everything a person is--every thought, feeling, idea and memory--is little more than an instance of brain activity. This is a radical and unsettling idea. My feeling of love is correlated with a particular set of neurons firing. My appreciation of great works of art is identical with activity in a particular region of my brain. I am a meat computer, weighing about three pounds, engorged with blood.

But he also complained of horrible headaches. He urinated on himself and didn't care. He was unable to copy writing and drawings.

A day before he was supposed to go to prison on child molestation charges, he was put into an MRI. Doctors discovered a tumor in the right lobe of the orbifrontal cortex. When the tumor was removed, his sex addiction vanished.

I heard about this story on the Philosophy Bites interview with David Eagleman. Check out the rest of the episode--it's a fascinating look into the intersection of ethics and neuroscience.
Posted by Unknown at 8:46 PM