What's The Use In Talking? 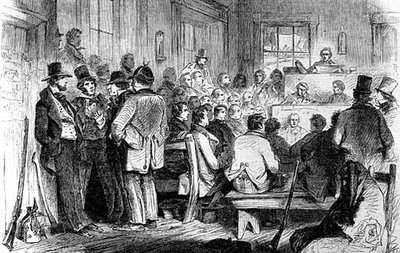 So Thucydides is writing about the Spartans' debate about whether to go to war against the Athenians, treating us to pages and pages of arguments for and against, well-argued and cogent. Yet in the end the argument that wins the day is a quick paragraph so full of platitudinous cliches it makes a Hallmark Birthday card look like Winston Churchill. Thucydides says this:

This made me think of Lyndon Johnson, who in the position of Senate Majority Leader, saw the magnificence of public speaking much like the way you or I would look at a sledgehammer, that is, a blunt tool, to be used by someone else.

Eloquence on the floor of the Senate didn't matter because it was not eloquence that changed votes. It was Johnson with his promises, threats, and compromises. Even after hearing the most moving speech, a Johnson crony would still vote, not with his conscience, but with Johnson, for voting with Johnson was how people got things done. Johnson's early success as Majority Leader came by way of limiting debate on the floor: he made the entire Senate much more efficient by using a hitherto little-used parliamentary technology called a unanimous consent agreement, which forced the entire Senate to vote on particular bills at a particular time, clearing up the traditional speechifying logjam of Senates past. Indeed, the only real importance that speeches had on the floor of the Senate in those days was the threat of the filibuster, and comparing the filibuster to normal eloquence is like comparing a fancy dinner with a competitive eating championship.

This happens in the critical moment in the debate about the 1957 Civil Rights Bill:

Once, when Everett Dirkson of Illinois rose to support [House Minority Leader William] Knowland with his special brand of empty grandiloquence ('I have been thinking much of Runnymede'), Johnson half-yawned and lazily scratched his chest, in a magnificent gesture of casual confidence.

That was Stewart Alsop as quoted in Robert Caro's magnificent biography, Master of the Senate. Here's Caro's quick gloss on Alsop:

The speeches didn't matter; Johnson's every gesture made that clear. What mattered was the votes--and he had the votes.

And he had the votes not because of speeches, but because he appealed to practical things. Yet still I think rhetoric is important, speeches are important, eloquence is important. Why?
Posted by Unknown at 3:02 PM