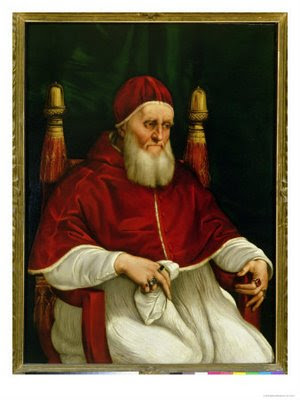 Of all the popes, the most curious must of course be Gregory the Uncertain, who was pope for only three years, between 1012 and 1015.

Gregory entered the papacy enamored with the fashionable superstitions of the time, such as miracles performed by holy men, the wondrous properties of relics, and the existence of and communication with demons. In fact, in his first year as pope, Gregory entertained a near-record number of pilgrims, con-men, and supplicants, who filtered in and out of the halls of the Vatican presenting the finger-bones of famous historical figures, odd growths on their foreheads that looked like cauliflower, and talking animals who got suddenly shy standing in front of the pope himself and would barely be able to talk about the weather. Gregory was quite amused by all these visitors, and was often seen clapping his hands and laughing.

However, Gregory was a weak-willed man, chosen more for his political connections to the powerful Florentine merchants the Snarkerellis than for his spiritual or organizational might, and he soon grew tired with his amusements and began in earnest to think of the nature of worship. This initiated what were known as the Months of Confusion, as Gregory would issue decree after decree, almost daily piling up new ordinances and suggestions, often confusing, mostly contradictory. For instance, on one day, Gregory, after studying some scrolls made the more obscure by his poor Aramaic, proclaimed that Christians should not keep cats. Duly, there were many devout families who, on hearing the news, tossed out their cats to the night and praised god for it. However, not more than eight days later, Gregory issued another statement proclaiming that the keeping of all pets, cats included, encouraged the love of Christ, and was a blessing, confusing all those who had so callously tossed our their family pets not eight days before. Gregory’s fiddling touched topics as diverse as haberdashery, accounting, archery, meteorology, cooking (especially the drying of fruits and fish), alchemy, the training and up-keep of house-squid, the naming of children, and a spectacular, daily, three-week-long clusterfuck of decrees relating to the wearing and washing of undergarments whose various twists and turns of argument are utterly incomprehensible to the modern reader.

Pope Gregory, however, ensured his obscurity when he pronounced his last bit of advice, in which he, in mealy-mouthed Latin, proposed that maybe the whole dogma stuff of the Catholic church should be taken as a metaphor or something, because it really makes more sense that way, right? He was found dead three days later. He was canonized in 1456, and is considered the patron saint of stutterers and the indecisive.

This pope fact was requested by reader Melanie Poole. Request any sort of fact in the comments, and there you go, I will write you one.
Posted by Unknown at 9:46 PM

I enjoyed your article on Gregory the Uncertain, although some of the long words used made for a slow read.

Could you write piece on Auschwitz's funniest commandant, with as fewer sylibols as possible please?