The Secrets of An Exclusive Secret Society Revealed

It's the first day of the Easter long weekend here in Canberra, and I am sitting in my bed with an espresso battling the cloying demons of memories of previous Easter long weekends. So, here I will give you a quick squib I wrote a while ago. Enjoy. 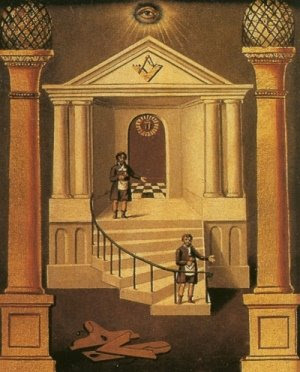 Conversations I get to have now that I’m in a Secret Society
GIRL: Wow, look at this, this guy at the Exclusive Hollywood Party, a photo of whom is in the tabloid entertainment magazine I am currently reading, he certainly looks a lot like you, isn’t that strange?
ME: Yes that is strange.
GIRL: And is that Scarlett Johannsen giving him a rather amorous kiss on his cheek?
ME: Yes. It appears to be so.
GIRL: That guy is very lucky, isn’t he.
ME: I agree wholeheartedly.

COLLEGE FRIEND: I didn’t know that you knew my (boss / girlfriend’s father / pastor) so well. Thanks a lot for getting me out of that jam I got myself into through of a startling lack of foresight and wisdom that unfortunately is well within character. If it wouldn’t have been for you I would have lost my (job / girlfriend / position in the church choir).
ME: It was no problem.
C.F.: And you know what’s weird, I just got my utility bill today, and there must be a problem with my meter, because now they’re actually giving me money. Can you believe that?
ME: Yes. Yes I can.

GUY AT A BAR, TO ME AND RONNIE: What was that elaborate, acrobatic handshake you guys just did? It wasn’t a secret handshake for some sort of secret society or anything, was it?
RONNIE: Of course not.
G.A.A.B.: Because whatever it was, it looked really awesome and I wish you could teach me.
RONNIE: We could, but then we would have to kill you.
ALL:
Posted by Unknown at 12:49 AM