Learning Today: The Most Perverse Animal In All Creation 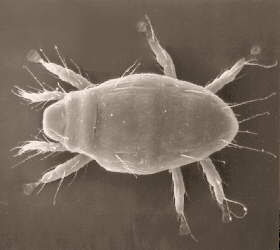 Every generation knows that it is in decline. The imperial Romans looked over their shoulders at the frugality of their fallen Republic and felt themselves unworthy. Now we all hem and haw about the existence of porn and reality TV. We wonder how it got this bad. How can a species survive when 4chan exists?
Well we have nothing on the animals.
Just take the humble Adactylidium mite, a matryoshka doll of indecency and horror. A little family of about eight or so sisters and one brother scurries around in mamma mite. The brother proceeds to impregnate his sisters while still inside the mother. Once the deed is done, the ungrateful bugs eat their way out of their mother, killing her. The brother mite, like so many males before it, just sits around mom's corpse; the sister mites make their horrible little ways to feed and grow, their awful issue already scurrying in their bellies, having sex, the next generation ready to emerge on an unsuspecting world.
What record of sin and venality these mites commit in their four-day long lives? Let's make an account. Incest--of the fetalphilic variety. Cannibalistic matricide. Polygamy. All this in four days. In four days I can barely commit a sin. It makes the worst of what human beings can come up with seem comparatively tame.
Next time someone tells you of the collapse in morals, just tell remind them to be thankful that we are not mites.
Posted by Unknown at 6:48 PM