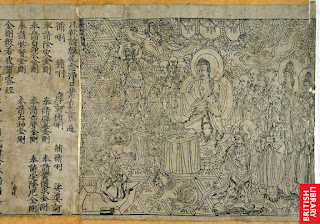 This is what I heard.

At one time the Buddha was staying in the Jeta Grove, near the city of Sravasti.

With him there was a community of 1,250 venerable monks and devoted disciples.

One day before dawn, the Buddha clothed himself, and along with his disciples took up his alms bowl and entered the city to beg for food door to door, as was his custom.

After he had returned and eaten, he put away his bowl and cloak, bathed his feet, and then sat with his legs crossed and body upright upon the seat arranged for him.

He began mindfully fixing his attention in front of himself, while many monks approached the Buddha, and showing great reverence, seated themselves around him.

So begins the Diamond Sutra, an ancient buddhist text illuminating the nature of reality.
And so begins the earliest printed text to which we can fix a date--868 A.D. The woodblock-printed scroll is five meters long, and beautifully illustrated. The text's finely wrought letters and detailed drawings is proof that at the time they were made in ancient China, woodblock printing was already a mature art, seven centuries or so before Mr. Gutenberg made his famous bible.
The sutra was discovered in a cave in the Chinese desert, where--along with about a thousand other books--it was sealed up at about the turn of the last millennia. 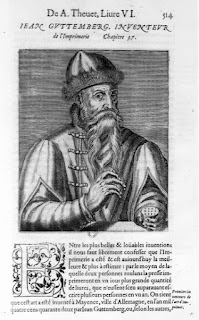 Why Does Gutenberg Get All The Credit?
It is not mere Western chauvinism--though surely that played a part. There was a deeper, more technical problem that prevented Chinese printing from assuming the world-historical importance of Gutenberg's printing press.

Look at this. It means 'a place for gathering.' It is one of over three thousand chinese characters. To read a text--and, more pointedly, to print it--a person needs to master over three thousand of these intricate characters. And then inscribe them onto blocks of wood.
Despite this setback. the Chinese still developed a sophisticated method of printing called moveable type, in which individual characters can be moved around and reused to print different documents. But printing didn't catch on as explosively in the East as it did in the West.
The West has a huge advantage over China on this point, but it has nothing to do with how we usually imagine what distinguishes societies. It wasn't a difference in racial ability, or moral fortitude. It wasn't that the West was hard-working, and the East was decadent.
It was luck. European languages have a character count languishing in the mid-twenties--so any woodcutter with some degree of technical sophistication could cut his own type and start printing. Thus, the printing press led to a flourishing of printed material in the West, and only slightly cheaper buddhist texts in the East.
The Next Dimension
And now let's fast forward--to now. Printing is undergoing a new revolution, one which (depending on who you talk to) will create a new world of manufacturing, superabundance, and ease; will let us print our own action figures; or both; or--neither.
Welcome to the era of 3D printing.
3D printing is exactly how it sounds. A printer makes something. Like a 3D something. It sounds a bit science-fictiony, and in a world inured to miracles, I find that we really need to be beaten over the head with how amazing it actually is. Take a look at what now, in the first stuttering steps of the medium, 3-D printing is doing.
With woodblock printing, a 3D object--raised letters on a block of wood--was used to impress words on a 2D surface. With 3D printing, a 4D process is used to create a 3D object. Surely, 3D printing is simply the next step in a long process that started thousands of years ago with the Diamond Sutra. History, that capricious arbiter, is the only thing that will tell whether 3D printing will change the world, or remain a mere novelty.
Posted by Unknown at 6:57 PM