Squids, and Facts About Them, Part Four 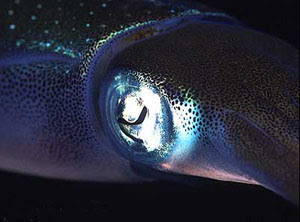 In an old aquarium a couple of miles outside of San Diego lives a group of the most remarkable squid ever. Known by scientists as the Comstock squid, better known as the prognosticator fish, these squid were subject to much attention before retreating from the public eye in 1985.

The prognosticator fish are the only living representatives of their species ever seen. A group of over fifty brightly colored squid, about the size of a wine cork, were bought from a grizzled miner on the Comstock lode in 1863 by a San Francisco investor, Mr. Antonius Shnarch. Shnarch put the squid in a small glass aquarium and included them in his Medicinal Mystery Show, based in San Francisco. People were amused by the strange looking fish, but nobody then could predict how much they would amaze the public for over a century.

A diary recently discovered in an attic in Sugar Bush Knolls, Ohio might shed light on the prognosticator fish's origins. The diary is from a man, Sharky "Pinchum" Jones, who had left his native Ohio in 1860 wanting to strike it rich on the Nevada Gold Rush. He returned in 1864, penniless, and would die of a liver infection April 1st, 1865 in his family home. The diary - in barely legible handwriting - describes a strange meeting Jones had with a Chinese merchant.

Old Smoker mine - played out. The Grande Dame - played out. Damn this luck of myne! To hell, I say! But the Silver Banshee - she has been displaying the sines, yes she has. I may be a rich man yet, therfore, [bought] a hundred feet.

I met yesterday with a consarnned Clestial! Snuck up on me aslepin, he did. Well and he said he knew I'd be in some money soon, saw it in his dirt-worshipin heathan fuckery. I said I don't give a screw and a half go and smoke some opium with the other Celestials, why didn't he, rot in his boots. But that night I done found a nugget a color in the Banshee mine and he was at the entrance, waiting for me like a love-sick mongrel puppy, and he said that I should give him that nugget, or else no other nuggest would come, and should I did what he said, I should be in riches for my natural life. Well I gav him a good thrashing from here to Washoe county, not sparing any blows to his Celestial Ribs and his eyes neither, so that by the time I was finished with him by god he'd never be recognized by his heathan Chinee gods no more, he had to go pray to the Negro gods he was so black and blue. Anyways, next morning I discover outside my tent this here aquarium, with a bunch a funny looking fish. Now ain't that something?

A sudden attack of St. Vittus' dance left Jones unable to work his claim, and his stock in the mine - which later proved a bonanza - was bought by his partners for a mere ten dollars. He had to sell the squid to pay for his passage back home.

Shnarch was surprised as the squid continued to grow, until they were about three feet each in length. The cost to feed them and find a bigger aquarium threatened to bankrupt Shnarch. One night, losing patience, Shnarch resolved to sell the fish to a butcher. But as he plunged a net into the water to fish them, something happened.

The next day, Shnarch opened up a new act. He would lead people up to the squid tank where, he said, the squid could tell their future. Through an elaborate series of gestures, the squid would communicate their divinations. They produced amazing results, and Shnarch's World-Famous Future-Telling Fish were a hit throughout the Western United States until Shnarch's death in 1916, at the age of 103.

After Shnarch died, the squid - whose numbers had dwindled to a mere dozen - were shipped to the University of San Diego's marine biology department. A group of prominent philosophers, theologians and political scientists protested the move. They believed each that study of the squid could unlock the mysteries of the universe, and each wanted a squid for their department. But a cloistered and diligent wing in the marine biology department turned their efforts to conservation, breeding the small stock of squid so that their numbers almost reached 200.

Finally, in 1956, the squid were ready to go to the public. There were rumors that the squid were involved in code-breaking activities for the Allies in the Second World War, but these claims have - as yet - been unsubstantiated.

The squid did little of any note until 1959, when a visiting movie star named Ronald Regan approached their tank. The squid became agitated. One handler, versed in their language, was surprised. "They say you'll be President," he told the bemused star of Bedtime for Bonzo.

From then on the squid would amuse themselves by predicting the winner of each presidential election. They never guessed wrong. The biologists would keep the news secret, out of respect for the democratic process.

In 1983, Walter Mondale, then the Democratic Presidential nominee, made a pilgrimage to the future-telling squid. He spent three hours with them. When he finally emerged, he was in tears. "Will you win? Will you lose?" an aide is reported to have said. Mondale shook his head. "I will lose," he said. "But that’s not why I'm crying. They showed me something… something horrible. Something no man with a soul should have to see."

Mondale refused to share the squids' secret. Some speculate that he has written in his will that his secret should become public after his death. But for that we will have to wait and see.

Since them, the prognosticator fish have been removed from the public eye. They are now housed in a basement laboratory, where they wait for something only they know. Private meetings are available: but few are ever granted.
Posted by Unknown at 3:05 PM