In Praise of Funny Voices 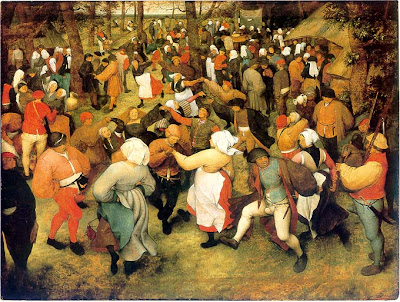 "People in aren't that mean," my friend Chris told my friend Serge. "If you fell down on the street they wouldn't stomp on your balls or anything."

When Serge told me this I laughed so hard I couldn't think of anything else for four, maybe five minutes. If I would've been drinking milk, milk would've shot out my nose. My chest hurt. When the laughter would start to die down, I would remember that line again they wouldn't stomp on your balls or anything and the laughter would spark again, my chest heaving, leaving me gulping for air. But I can't expect you to understand why this was little story was, to me, the height of Western Humor - it was funny because Serge told it in a funny voice.

The voice was this sort of clipped, muffled version of a Hollywood imitation of a mid-century tough, if you can imagine that. As an accent, it was weak. As an impression, it was horrible. But as a funny voice - well, it was perfect. You just had to be there, I guess.

A lot of people say that friendship is about trust and intimacy, about confiding secret-most heartfelt feelings, about sharing passionate mutual interests, about companionship and company. For me, friendship is all about the funny voices.

Me and my friends have the New York Voice, the Robot Voice, the Seagull Voice, the Pretentious Artist Voice, the Pirate Rapper Voice (M.C. Pegleghook), the Werner Herzog Voice, the Australian Voice and a voice that’s just called the Voice. The Voice is deadly. A sort of mangled imitation of a British accent that, like an over-Xeroxed piece of paper, lost all of its form and definition from over-repetition until it didn't sound British at all - it just became the Voice. Two of my friends talked in the Voice for almost three weeks straight. It got so bad that they had trouble speaking normally. They didn't want to speak normally, they were content to just banter in the Voice.


Let me explain with an example: The Pretentious Artist voice goes like this. You speak in a fake German accent, elongating your vowels, accenting odd syllables your voice over-confident verbal strut. But the voice itself is only one half of the fun, it's what you say that really matters. The pretentious artist will describe a pretentious art work and then attach some hideous price-tag to it: "My new art installation, you must see it! First, I shave off all my body hair. Then I mold the hair into a giant mustache! Then - I set it on fire! It's genius! A representation of the modern soul in plaster and hair." Then, you wait a beat. "The price? ONE MILLION DOLLARS!"

It's hilarious. Believe me.

Because when you speak to someone in a silly voice - especially if it's a really stupid silly voice, you're trusting that they'll get it, that they're in on the joke, that they won't look at you with one cocked eyebrow and say, in an everyday voice free of willful mispronunciation or silly sentence constructions "What the hell are you talking about?" You're certain, when you're talking in a silly voice, that you are going to be allowed to goof off, to put on hold some of your seriousness. And it's damned funny. But the problem is that you have to be pretty good friends with someone to break out your Pirate Rapper Voice. You can't do it with just anyone. Because for the people who aren't in on the joke, who haven't been explained the rules of these games, some essential part of the joke is missing. All of my friends might be doubled over themselves in giggles, while people listening in - well, you just have to be there.

And because of that, there's a wonderful intimacy that comes with speaking in a silly voice. I was hanging out with a bunch of people a couple days ago, and we started speaking in funny voices. It was like a floodgate broke and I felt suddenly closer to these people, more accepted - because when you're with someone and you pinch up your vocal chords and pretend to sound like a chipmunk or something and your friend starts to laugh and then starts speaking like a chipmunk too, then you know that you are actually friends; a certain sort of friends, good enough friends to speak in a funny voice to.

-
Why don't you tell me about your silly voices?
Posted by Unknown at 12:40 PM

I really miss the silly voices. I will have to get some started with my friends here in Chicago. We have never really utilized any non-standard voices, instead simply relying on layer-upon-layer of sarcasm, which we know none but our closest friends will be capable of penetrating such as to achieve comprehension.