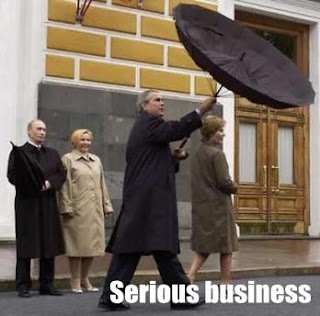 via LolPresidents
Now, I'm scared of Bush like the next liberal, but sometimes it all goes too far. Like a supervisor of mine who I overheard educating some hapless cashier - in the staccato squeal of the profoundly over-caffinated and under-informed - that she thought that September the 11th was an American version of the burning of the Reichstag. Say what you will about American education, but I don't think that a supermarket check-out line is the most appropriate place for a lecture on the history of the Second World War. And then, on Boing Boing today I saw a post about Naomi Wolf's The End of America: A Warning Letter to a Young Patriot, which has this list of ten 'warning signs' that shows oops! we're living in a fascist society. They are:

4. Set up an internal surveillance system

6. Engage in arbitrary detention and release

10. Suspend the rule of law

Now we, as blog-reading, well-informed, Bush-hating Americans are meant to look at this list and gasp and say to ourselves Oh no! Bush is in the middle of creating a fascist state. And then we get to sit back in our easy-chairs, feel doomed and indignant, and maybe make a tut-tut-tut sound before going back to whatever it was we were doing before we realized we were living under the iron fist of Darth Bush.

Now there are a couple things wrong with this checklist. The first is that it's pretty thin, information-wise. You could apply these ten points to the administration of that greatly beloved tyrant, Abraham Lincoln. Now, I think that the worst thing Lincoln did was to use hard Presidential power to secure his goals - it set a dangerous precedent for American dictatorship. Go through the list and ask yourself: did Lincoln do that? I think that the only thing he really didn't do was equate dissent with treason.

You've gotta remember, too that before Lincoln came around America was less a nation and more a loose confederation of states. Secession seemed a bit extreme, sure, but well within the logic of people's conception of American nationality. This was a time of unstable borders, where American expansionism drew up new territories by the decade, the term United States used to be plural (these United States), and regional and sectional differences were incredibly profound so that it might seem a different country in New York and South Carolina.

The second thing wrong is that I don't think that America could even host a fascist state. While Lincoln certainly forged a nation with a unified, if shaky national identity, I think that the monolith of our shared language, national politics, and national media hide a divided nation. The difference in culture and practice from Idaho to California to New York is so great that imposing the order and discipline of fascism over America's four (plus!) time zones would be a logistical nightmare about a billion times harder than, say, imposing universal healthcare on our unsuspecting nation. We've had a hard enough time imposing a working national education system on Americans. How the hell do we think we can impose a well-run fascist state? Try imagining the dystopic government Wolf intimates in her checklist actually being able to quash the deep stream of dissent of our American culture. The greatness of America is the same as our weakness: we're who we are, and not much can change us, and who were are is a group of contrarian, individualistic, materialistic assholes. And those don't mix well with genuine fascism.

The third thing is that the idea that the Bush administration is somehow on par with Hitler or Mussolini both diminishes the horror of true fascist regimes and elevates the efficacy of the Bush administration. The Nazis, the Soviets, the fascists - they were a organized wave of unspeakable horror and repression. The Bush administration is a bumbling enclave of kids who were bullied too much in high school and have some hard-on for hard-power. They're so incompetent that they'd be utterly laughable if, say, they were the leaders of a country the size of Turkmenistan or owned the coffee shop down the road. They might be messing a lot of things up, but the America that exists today, after six years of Bush, is not some predetermined step on the course to tyranny; it is, rather, the result of large-scale failures of leadership.

That's not to say that if the Bush administration had effectively pursued its policies, we'd be much better off. But I think that the real lesson we'll get from this administration is one of incompetence and arrogance, not malfeasance and Machiavellian politics. To paint Bush otherwise, as some sort of Darth Vader character, is to give him far too much credit.

If you like this, check out Damned Interesting's post on a failed coup set up by wealthy industrialists in the 1930s....
Posted by Unknown at 7:38 PM

you might try actually reading her book.(typed in a staccato squeal)