A view into the essential conflict of a political junkie, as seen through my belief that John Edwards really actually cares about me, personally 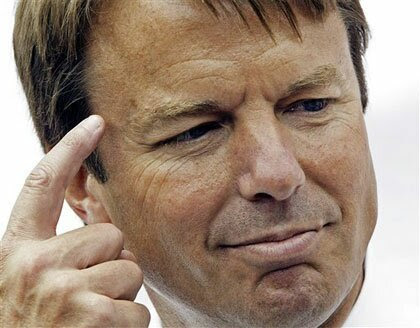 A political junkie is, in his heart, a conflicted beast. The conflict is this: he is interested in politics because in essence he is an idealist, and believes that his participation in politics can positively change the world; and yet, as his knowledge of politics deepens, he realizes that politics itself is a dirty, hypocritical business - he becomes the very opposite of an idealist, a cynic.

It is surprising that we continue to be surprised by the hypocrisy of elected office, even now that such hypocrisy has become a tired cliche. If we found an idealist's ideal politician, someone pure of heart, with his constituents' best interests in mind, articulate and intelligent, and everything else good and decent, we would disbelieve that he existed in the same way we'd disbelieve evidence of a unicorn or the Feejee Mermaid.

The political junkie - one who does not burn out - must feed on this conflict. They must, if they are to survive, find pleasure in dashing their newborn ideals against the cobblestones of reality. The same way it feels really good to gnaw on a canker-sore. Of course, when politics actually becomes a profession, ideals have nothing to do with it at all. It's all about power. But for the armchair political junkie, the most power we have is... well, it isn't much: we can vote. Maybe even in a primary; and if we're lucky - in a primary that matters. So we must feed off of this conflict between the idealism of what we think politics could be, and our cynicism at what it actually is. We may find a politician who our idealistic hearts can fall in love with, but then we find out more and more about him - and realize he's just like everybody else. And that realization is what keeps us going.

So I say what I say now with a sort of baited breath: I think John Edwards is on to something. Maybe.

The issue around which his entire campaign is mustered is poverty. Our country is one increasingly divided between rich and poor. One in which the basic opportunities of advancement are denied to a vast unwashed swath of people - not because they're especially stupid or lazy, but because they had the bad luck to get hurt and not have medical insurance, or they just fell out of work and couldn't fall back in. The problem is so deep, so old, that it seems incredibly boring, and I feel a flush of mawkishness writing it out like it was news.

The lack of a social safety net, a lack of some basic protection against the twists and turns of fortune, makes the American Life one of worry and fatigue for many. Look at me: a recent college grad, in so much debt it hurts like bad arthritis, having to pay health insurance out of my own pocket, working what would be affectionately called a 'dead-end job'. My perch on the great tree of the American Dream is very precarious, indeed. One bad wind will knock me off.

I'd have a much more interesting blog if that happened, that's for sure.

That Edwards dare take on poverty as his key issue is courageous, especially given how much cawing there is about crap like 'morality' and 'terrorism'. It's an issue - one of the rare issues - that actually matters.

Of all the candidates, Edwards the only one with a certain amount of sustainable vim and vigor. Hilary - I don't know about her. I can't understand her appeal at all, apart from being part of the Establishment (feel free, at this point in the blog post, to make doom noises). And I think that Obama, while he can be a wonderful speaker, will inevitably disappoint his supporters. We expect so much from him, that when he fails to deliver, we feel as if we've been cheated, that the Obama we thought we knew was just a fake, another poor political fake. Obama has all the personality of a Messiah. Messiahs, if you've ever noticed, aren't exactly the sort of people you want over your house for some steak and beer.

So Edwards. Sure. He has the Brylcreemey stench of politician around him. But watch. He might just get up there and blow us all away. He might be something more than a basic politician - he might be earnest. And if he's not earnest, he'll at least pretend to be earnest in a very well crafted way.

And in the end, that's all that matters to a political junkie.
Posted by Unknown at 6:56 PM