Oh my love it's a funny little thing. 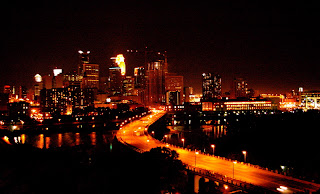 Photo by Flickr user Andrew Ciscel
Mornings like this one, I wake up with a sense of inevitable dread. I’m afraid that all of my hopes will float by me unfulfilled, and then, what will happen to me? Will I curl up into a little ball? Will I become one of those bitter old men who walk the streets with loneliness like lead weights? And I lay in the warmth of my sheets, and think of how my day’s going to go once I cast off the duvet and throw on clothes, and from there I think of the next day month and week, and there’s something meaningless to it all, something flat and without pay-off. I'd rather just lay in bed for another fifteen minutes and sink into the shallow-oblivion of half sleep.

At the same time as I worry this, I also think: I’m being so clichéd, every other twenty-three year old with a touch of ambition feels as hopeless as I do. It will pass, or I'll get used to it, or I'll wake up tomorrow and bam everything will be okay.

Maybe that's worse, though. That everyone feels this way.

*
I’m living in a strange city. I don’t know which bars to go to, I don't know which cafes to go to - and when I do go somewhere, I'm alone - and shy. So I read a lot. I've been watching far too much of the HBO Original Series The Wire. And don’t get me wrong – I’ve met a lot of very nice people here. But there’s something missing in the day-to-day concourse of my life. My great friends – those people who know me well enough for me to be wholly open with them, who probably like me enough to read this blog on a semi-regular basis – they’re all far away from me. I hear their voices on the phone, I send them e-mails. But after a while, those long-distance calls make my present loneliness just seem a bit starker. I can remember a time when I knew everyone, when I could feel popular and successful, where I was a senior in a small college and I knew what to do.

So I feel caught adrift on something. Placeless.

And where do I go from here? My ambition leads me somewhere. But where? I know I want to write. But there’s a whole underground economy of wannabe writers, garnishing their egos with short stories and blog posts, who have just as much ambition and just as much talent as I do. I'd like to be able to sell some Alternative Weekly my squid facts for one-hundred dollars a pop. But the things I find interesting seem to bore other people. I feel foreign to a big bulk ot people. And there are plenty of people who have found themselves friendless in a big city. There are plenty of people who wake up and get scared that the next warm summer day they step out into they'll be twenty-four and not be allowed to have fun.

You’d hope that your dread, your angst, your deepest fears, weren’t so goddamned normal that they were terribly clichéd. I wish I could be feeling something horribly shocking and new. I want groundbreaking angst.

But at the same time as I dismiss this, it's there, and it's real, and it's hard to shake it. I wake up and don't have joy, only hunger. I work and what I do is desperate - like a person at the beach trying to scratch their name in the sand quickly before the next wave comes to wash it all away.

I want to run away to a new life. One where I can go into a cafe and everyone says hi and wants to talk about books. One where I can go read my short stories out loud at open mic nights. One where I can call my friends - and see them, in flesh, in real life - and talk with them in silly voices. And the hard part is that the life I imagine seems about as possible as me making friends with Mark Twain; which I want to do, by the way.
Posted by Unknown at 6:07 AM

follow your ambition, and you will be fufilled in knowing you went where your passion led you.

i remember how it was when i moved here from fla, two years ago; it did suck because it is hard to break into a city where people have their set social groups nad friends they've known since elementary school. but hey, dont lose heart! you have me, and if you dont think i am too creepy, come out with me sometime and i will show you great bars and introduce you to people to stave away the lonliness.
i believe you can email me through my profile.
keep doing what you're doing, youre writing is quality.

I don't know if it really ends, the angst. Good luck and be reasonable.

If it helps, I liked the squid facts. And one about Wittgenstein.