A Fact About Our Nautical Friend, The Squid # 2 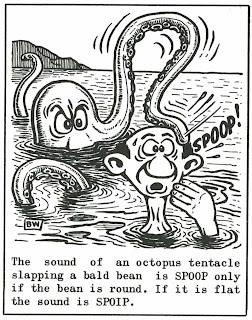 Image by Basil Wolverton from the Animation Archive
There arose a peculiar belief about squids among seafarers, that touching a squid would cause severe, almost instantaneous baldness. I've found evidence for this belief in English, Portuguese and Spanish writings (the French are curiously silent, but that might just be a shortcoming of my research). The belief even led to the popular (if mystifying) nautical exclamation: "He's so bald he must've shaken hands with a squid!"

Here's a section of the diary of Robert Snarksman, an officer of the Royal Navy who served from 1798-1820:

We were out afishing in the earlie day when we caught a monstre: a squid, aboute the size of a large dogge; we tried to fling it back overboard, but in the fighte a tentacle touched poore Pipkin, and he woke next morn his pate wholly bald.

This belief has also inspired the sea shanties, Squidtop, and She Served Him Squid For Dinner.

In the journals of Lorenzo Snarkaretti, an Italian explorer who visited China in the middle of the eighteenth century, we find evidence for how far this belief spread:

The Chinese, in their brothels, will have numerous squid living in their baths, as if the baths indeed were large aquariums. The women, when they bathe in these, will be approached and often fondled by the creatures and their many tentacles. This practice renders the women entirely hairless, which is the preference of the Chinese nobleman. The women wear the most elaborate wigs, which are sewn from the hair of peasant women by armies of slaves. The wigs can often be worth more than whole households, and tower over the diminutive women! Though we have never seen these baths, them being in the women's quarters and viewable only by concubines and eunuchs, they are so widely reported, they must not be doubted to exist.