A Fact About The Philosopher Ludwig Wittgenstein # 7 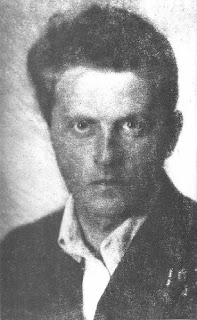 "No I won't! No I won't! I will never!" Wittgenstein screamed at a fashionable New Year's Eve party in Berlin, ushering in 1921. The next day found him on a train to Sweden, where he got himself a small room in a boardinghouse. For the next six months, Wittgenstein refused to speak a single word. He communicated in a series of grunts and gestures, spending his days hunched over a desk, writing furiously, tearing out his hair, ripping up pages and pages of manuscripts. Often at dinners, Wittgenstein would frustrate his fellow boarders by trying to participate in their lively conversations about Swedish politics and art - but without words. The great philosopher would get angery that nobody could understand him, often throwing plates against the wall and shaking intractable interlocutors. When summer came, he built a large bonfire in the countryside and burnt all of his past six months' of work. He wrote a postcard to his sister soon after that said, simply "Life is for reading great works. And writing them. There is nothing else."

Wittgenstein scholars have long fantasized about those lost pages. What new insights could they give to Wittgenstein's sometimes obscure oeuvre? In 1998 their questions were answered when the landlord of the Swedish boarding house was cleaning up the disused attic, and found a manila folder, with Ludwig Wittgenstein's signature on the cover, one edge half-burnt. He looked inside and found the only surviving pages of that 1921 manuscript. But Wittgenstein hadn't written a word. He'd filled the reams of paper with nothing more than thousands of drawings of differently sized squares.
Posted by Unknown at 9:56 AM

Fascinating read - what are your sources?