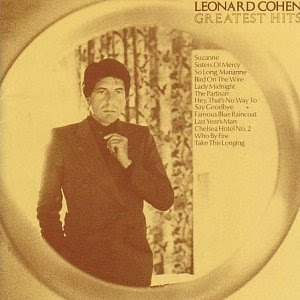 Before I had my first kiss, before I got drunk at my first party, before I’d ever made a meal from scratch or paid a bill or got a haircut I liked; when I was an awkward young boy who mostly just thought about the eruptions of pimples on his face and fostered a guilty suspicion that somehow I was different from everyone else, that I was weird, and I believed that this unspeakable weirdness irrevocably quarantined me from peers – back when I was twelve or thirteen and was slowly becoming me: I listened to Leonard Cohen and read Milan Kundera, artists who I only realize now were my initiation into the mysteries of adult life. I would memorize their stories of doomed love affairs and baffle myself at their philosophies. In childhood I had been able to parcel out the world into neat packages. There were the good guys and the bad guys, and the stories were simple, whole, and sweet. It would be underestimating Cohen and Kundera’s influence on me to say that it was from them that I realized how compromised and complicated the world really was; they did so much more, they introduced me to the visceral sort of human struggle I would spend the next ten years or so trying to come to terms with. In their stories people hurt each other not because they were evil, but because that’s what people did. Life hurt. And I was stunned by that realization.

I had only started to get the first aches of crushes: daydreaming about taking girls I’d barely spoken with on dates and kissing them and having sex (this fantasy all the more passionate for how unclear sex actually was to me) and I could already see that something was growing in me that I couldn’t contain or satisfy. I couldn’t stop thinking about girls. And I could get any girls. That middle ground of sexual frustration was, to me, an uncharted span on the map of life. I had read nothing about it, seen no movies about it, everyone on TV looked so assured and witty when they talked about love. I must be different, broken, wrong.

And then I started listening to Leonard Cohen. Cohen knew where it was at. Just look at these two stanzas from the song Take This Longing:

Your body like a searchlight
my poverty revealed,
I would like to try your charity
until you cry, "Now you must try my greed."
And everything depends upon
how near you sleep to me

Just take this longing from my tongue
all the lonely things my hands have done.
Let me see your beauty broken down
like you would do for one your love.

These words meant nothing to me at the time, but I could intimate that they were important. There was a clue to my frustration in the puzzle of Cohen’s love affairs. I knew that when I could understand them and feel a connection to them, then I would have somehow broken out of my childhood, although I couldn’t express it like this at the time – I just, to be fair, pretended to know what Cohen was on about, and left it at that. So I listened to the album over and over until I had memorized every line, every image. I can sing along to the whole thing, even today.

And underneath all this emotional longing, there lurked beneath Cohen the figure of the messianic prophet. That there was, beneath the texture of loss and love, a deeper love, a religiosity that as a purely secular young whelp I could only indulge in by not admitting what I was doing, by singing along, but not listening to the words that I sang.

Milan Kundera brought me into the same world of sex and mysticism, but he spoke in a learned lilt that I recognized immediately as a style, as cool. His stories were chock full of that same heady and opaque burble of sex and infidelity; but he also built his stories around people philosophizing, trying to crack the veneer of life to find some meaningful core. His characters, for all their emotional backstabbing, were not just petty players in an afternoon soap opera. I mean, they were that – but they also moved around a world of ideas. And while I was shocked by the ideas themselves, I was more shocked by the idea that you could think vigorously about how to live your life. That you could have ideas. I knew then that I would unlock that door to adulthood and the frustration, the confusion, and the compromise would be illuminated by something richer, something I could not have before expected: art.

Maybe a year or two after I first discovered Cohen and Kundera, after buying more albums and more books, I started writing myself. And looking back at my early attempts at fiction and poetry, while of course I feel the requisite embarrassment at everything you’re meant to be embarrassed about: the clumsy technique, the self-importance, the mawkish melodrama; I am more struck by how back when I somehow decided that I wanted to writ, I was speaking with a voice that I had cadged from Kundera and Cohen. In some ways, those early attempts at stories outshine a lot of the work that I did when, dizzied by drugs and adolescence, I fell in love with my own sonorous voice; or even worse – the stuff that I wrote in College that tried to tackle the Big Ideas which turned out as bad as you could expect. Those attempts at fiction failed because their intentions were impure. I wanted to write them to show how good a writer I was, to show how much intelligence I could bash against my emotional problems. My early work – and the work of Cohen and Kundera who inspired it – seem to me something purer, inspired by the love of the story, by the love of art.

I’m thinking about this now because a couple of weeks ago I stumbled on The Unbearable Lightness of Being in the library and picked it up. A week after that I was trolling through a friend’s music and picked up the first Leonard Cohen album I ever had. So there I was, here I am, reunited with the works that started it all. And it feels odd to look over my shoulder and see me ten years ago listening to the same music, reading the same books, and to feel a continuity, and a growth.