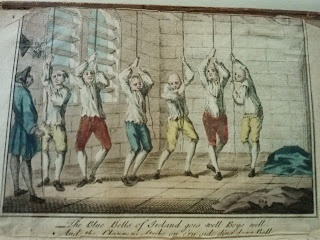 England is an island fond of its bells. Since the 17th century groups with names like the College Youths and the London Scholars have clambered up church towers to the bells, not to make music, but to ring a set of particular permutations called 'changes'. Sometimes they'd drink while they were on the job--a 'peal' of 5040 changes could take upwards of three hours to ring, and it was hard, laborious, thirsty work that much deserved a beer.

That the ringing took place in the church tower was often the most religious thing about English bell ringing. Bell ringing societies were more likely to give a peal in honor of someone's birthday or a horse race than to usher in divine service. This all changed in the 1850s when church reformers tried to reconnect the bell tower and the church. The buildings were literally connected after all. They wanted bell ringing to be associated with church functions. And they wanted the bell ringers to quit drinking while they were on the job.

This sometimes did not go over well with the bell ringers, who, like many of us, were fond of their beer.

History shows us that the West Worlington, Devon, Society of Ringers ain't nothing to fuck with.

Fact gleaned from Ron Johnston's Bell-Ringing, p 233.
Posted by Unknown at 8:21 AM

Hello Everyone MY Names is Jeanell Mary. i am from coluimbus GA.
I want to Testify To everyone that Ansh Loan Company is AMAZING!
They communicated so effectively, AND They were very responsive to questions.
And after all my Credit Score was checked, They Gave me A Loan of $26,000 Same Day I applied.
I was Rejected twice by bank But im Glad i finally got Loaned by Ansh Financials services.
Friends worry no more, For your loan stress free kindly write Ansh loan company and get approved same day you apply. Email::::: Anshloans@gmail.com