Puts it all in perspective, doesn't it? 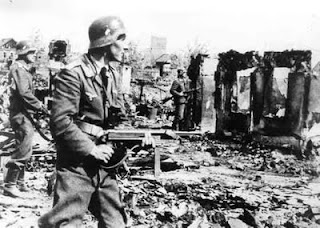 In the Second World War, the Soviets suffered more casualties in Stalingrad than the total combined causalities suffered by the Americans and the British for the entire war.

Over the course of the war the Soviet Union lost about 15% of its population.

When we think about the Second World War we think of the battle in France, of troops marching through Berlin, of the atom bomb exploding in Hiroshima and Nagasaki. But the real story of the Second World War happened along the Eastern Front--a brutal destructive stalemate where two dictators threw countless human lives against each other without regard for the death or carnage that ensued.

Statistics from the BBC History Magazine Podcast's story on the Eastern Front in their June 2011 edition. I also encourage everyone to listen to Dan Carlin's wonderful podcast on the Eastern Front, Ghosts Of The Ostfront. It will give you nightmares. Historically accurate nightmares.
Posted by Unknown at 8:28 PM

Email ThisBlogThis!Share to TwitterShare to FacebookShare to Pinterest
Labels: history