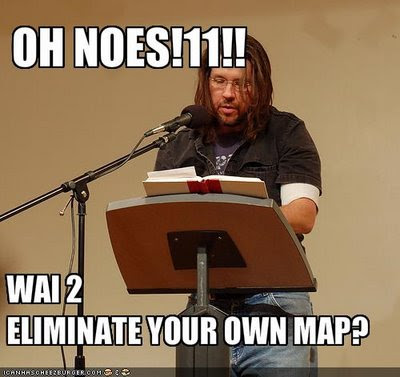 As far as public figures go, this death feels personal to an embarrassing extent. Usually I am somewhat callous towards death, especially about the death of people who one does not actually know personally. But it's not just insensitivity to the public lamentations around Heath Ledger and Princes Di--barring it befalling close friends and family members, death fails to move me. Throw a friend in my lap, inconsolable that her sister's best friend died, and I'll look at them with the condescending incomprehension fitting the observation of forgotten and ecstatic religious rites of some minor deity of the Roman pantheon. But then I read that this author has died, David Foster Wallace--who I have never met and who I have had only the most tangential personal relationship with--I can't do anything but fall to my bed.

Enough of this personal stuff. Well, one more thing. In my senior year of college when I was worrying whether or not I should try to "make it as a writer" I wrote David Foster Wallace with a story of mine. I got a postcard back a couple months later, and he said that my style was "clear and unpretentious" (I can remember that) and he wished me luck in a way that I interpreted as meaning that he saw some promise in me. My number two most recurring fantasy about my novel (number one is having ex-girlfriends and -crushes call me and tell me how my they like me) is that I would get it published and sent it off to DFW and he'd read it and appreciate it and we could become friends.

Of course that's not going to happen.

But that brief brush with the man himself is not enough to warrant my feeling upset by his death. Even taking into account the place that DFW's writing held in my own personal story, his death is not enough to make me fall on my bed and not want to get up and, at a Korean Thanksgiving I was attending, invited by the Tae Bo teacher I have a ridiculous crush on, his death should not make me nearly sob over the tiggim that "My favorite author has just killed himself"--a sentence which elicited nothing but bemused glances from my dining companions, English- and non-English-speaking alike.

The thing that makes Wallace's death so poignant is that it shouldn't of happened. First, we all wanted more. Wallace's was the kind of writing that was perfectly compulsive. The loss of his voice, of the chance of another novel, that's baffling to me.

But there's more, and here's where we might have to get a bit more personal again. Wallace seemed to have struggled with the demons that come with being a smart, sensitive person in the world. And he'd seemed to really conquer them. An aside that will make sense further in this paragraph: You know how you can tell the difference between someone who gets Wallace and someone who doesn't? Someone who doesn't get him will talk about his verbal acuity (or, pretentiousness) those footnotes, that flair. Someone who gets him will talk about his observational acuity. How he seemed to be able to frankly talk about the dark corners of life with such off-putting, shocking accuracy. Like he just peered into your secret, crazy thoughts, described them just right, and told you what to do about it. And so he peered into those crazy thoughts, understood them, and didn't like what he saw.

Is it a cliche to say that the choice of our lives is whether to live or whether to off ourselves? It's something I've thought about. Does the periodic bed-bound wordless sadness that sometimes strikes me--is it worth sitting through to get to the other bits? To get to those times that rank with eating chocolate cake or hearing that your friend gets promoted or sitting at Korean Thanksgiving and having the Tae Bo instructor who may or may not want to date you hold your hand. Does the banal difficulty of life merit the pleasures? Now, sometimes I haven't dared think about that reckoning. But most times I think, pretty solidly, that the pleasures by far outweigh the indignities.

But Wallace, who I respect, who I understand, who I thought got this stuff better than most people out there--he thought otherwise. He thought that life was just too painful to keep going.

And so Wallace's suicide makes me afraid!

I'm not angry at him. I'm not going to throw around any pablum about how it's grossly selfish to kill yourself or anything like that and I'm not going to try to call him crazy for doing what he did. Because if you can't understand why he'd do it, then you're not trying hard enough. And even though those things are true, that suicide is selfish and never the right answer, just saying that doesn't make sense of his death, it doesn't give any sort of comfort.

The tough part is thinking that with all his sensitivity and intelligence, this was his answer. Not another book, no more courses teaching students, not even an easy life reading somewhere eating cake. A rope around his neck. That was his answer. And it's that answer which hurts. Like if you hiked up a huge mountain to meet an enlightened master and asked him what you should do with your life and he turned his eyes towards you and slowly, proudly, asked you what brand shoes you wore.
Posted by Unknown at 1:09 AM

i think the crux of what's freaking you out is the assumption you're making on the "why" of it. you don't know the why. no one does or will. so, don't be so fast to apply his death to your own fears. it may not be relevant.
<3

Your post here is one of the best appraisals of the man and his writing I've seen in the past few days.

I'm glad we were both able to write about DFW, and that we have a love of his writing as yet another thing in common.