The Precious Beaver Testicles of Gerald Of Wales 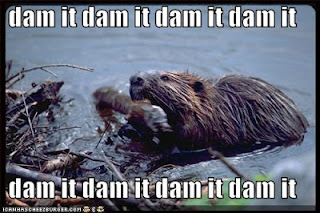 History remembers the killer apps which remade the world--the printing presses, the cotton gins, the fire.  The conquering army, the victorious legislator, the trailblazing poet--these are the names that will live on forever.

And you're not one of them.  And I'm not one of them.  And nobody you've ever met is one of them.  (Probably.)
No, our world is rich in folly and failure.  Medical researchers calculated the half life of a given truth to be 45 years.  That is, of any given set of facts (all things being equal) half will be disproved in a little less than half a century.  So in forty-five years, half of everything you think is true will be proven wrong.  No wonder old people get so cranky.

Brilliance, humility and genius prove no antidote to failure.  Take the ebullient medieval scholar Gerald of Wales, who lived in the 12th Century.  Tall and fearsome and erudite, Gerald became a churchman and a politician.  The undisputed 'universal scholar' of his age travelled to the peripheries of the British Isles.  These trips resulted in exemplary, entertaining and learned histories of Ireland and Wales which remain go-to historical sources.  In addition to these travelogues Gerald published about twenty other tomes on topics ranging from theology to hagiography to biography.  (It was the 12th Century:  there wasn't really any wiggle room about genre).  Gerald of Wales combined his era's best learning with keen empirical observation.  If anyone should have avoided folly, it would have been Gerald of Wales.

But even poor Gerald fell prone to mistake.  Here's just one.  Nestled at the end of a fine description of a European beaver colony, Gerald goes off on a tangent about how when beavers are frightened they bite off their own testicles.

Yes, you read right.  Gerald of Wales thought that when hunted, male beavers chomped off their own balls with their sharp sharp teeth.

Gerald's peculiar observation has some source.  He is going off a description of beavers in Aesop's fables, in which the beavers, hunted for their useful testicles, wisely detached their gonads from their bodies and offered them to the slavering dogs--gratis--so that they could go on their merry way, alive but gelded.  This is backed up in Pliny's Natural history which tells pretty much the same story.
And even this is not as crazy as it seems at first blush.  Beavers were hunted for a thing called castoreum--which Pliny, Aesop, and Gerald all misidentified as the beaver's balls.  Actually castoreum comes from glands in the beaver's anus and it proves incredibly useful--it remains in use today as a perfume base (giving 'animal notes') and a food additive.  A Scandinavian schnaps called Bäverhojt is flavored with castor.
So the myth of beaver's self-castrating self-preservation is explained, if not excused.

And this is how the parade of folly makes its march down the avenue of history:  a misheard word, a bad joke, a good guess that turns out wrong--repeated again and again until it assumes the air of truth.  And in forty-five years, if the scientists have it right, half of what I've written here will also be filed away in the ignoble archives of idiocy.

This post was inspired by the always-inspiring In Our Time with Melvyn Bragg, which recently ran an episode on Gerald of Wales.
Posted by Unknown at 4:37 AM

That "in forty-five years, half of everything you think is true will be proven wrong" I can attest from personal experience. As a complement to your Bäverhojt you might try some Black Ivory coffee, http://en.wikipedia.org/wiki/Black_Ivory_coffee
Steve Van Strum svs7@earthlink.nete