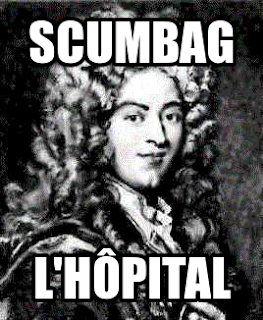 In 1696 Guillaume de l'Hôpital published one of the first calculus textbooks, euphoniously entitled Analysis of the Infinitely Small for the Understanding of Curved Lines--or the Analyse for short.  In the Analyse's pages l'Hôpital laid out a method of figuring out the limits of indeterminate forms that was a huge deal in the burgeoning field of calculus.  It made L'Hôpital a star.

With all the linguistic verve of mathematicians, the rule was dubbed l'Hôpital's Rule, and ever since it has been rammed into the heads of calculus students, where it remains, a bit of discarded fact lodged somewhere between first girlfriend's middle name and capital of Peru.

As you can probably tell from the de appended to l'Hôpital's name (and the frothy wig perched on his head) good old Guillaume was a nobleman.  More than that, he mixed a genuine mathematical curiosity with the ability to straightforwardly explain the stuff he was interested in.  But while l'Hôpital was undoubtably a very good mathematician, and his textbook remained required reading for a hundred years, it turns out that all of the great discoveries that l'Hôpital is known for--including the eponymous rule--weren't actually discovered by l'Hôpital.  He merely owned them.

It all started in the salon of Malebranche, where the aristocratic thirty-something savant l'Hôpital met the 24-year old wannabe math nerd Johann (sometimes John) Bernoulli.  At some point in the night Bernoulli whipped out his 'secret weapon'--an unpublished forumla on how to figure out the radius of the curvature of a curve.   L'Hôpital, impressed, signed Bernoulli up to be his calculus tutor for ten months.  In 1694 l'Hôpital offered Bernoulli a further three hundred francs a year if he would tell him everything he could about this new-fangled calculus--and not tell anyone else.  Bernoulli agreed, and produced a series of brilliant letters explaining everything l'Hôpital could hope to know--and then some.  L'Hôpital would then take the insights Bernoulli told him and pass them off as his own, reaping the fame.

There was good reason for this.  Johann Bernoulli was an irascible  thin-skinned man who involved himself in quite a few mathematical kerfuffles.  One acrimonious struggle was with his own son Daniel.  To win the argument (against his own son!) over who came up with some principle of hydrodynamics first, Johann resorted to forgery.

So clearly Bernoulli was jealous of his reputation.  Since he didn't claim l'Hôpital's discoveries with any special grievance, people just thought Johann's claim was just Johann being Johann again.

But Johann Bernoulli was right.  And nobody realized until 1922, when Bernoulli's first calculus lectures were discovered in a musty archive somewhere.   They were written before l'Hôpital's textbook.  And they were undoubtedly l'Hôpital's inspiration for the Analyse.  The L'Hôpital's Rule is really Bernoulli's Rule.

But I suspect that renaming l'Hôpital's Rule is just plain greedy.  The Bernoullis claim a menagerie of grey matter so quirky and brilliant that the three generations of genius could easily make up the cast of a Wes Anderson film.  (Bill Murray as Johann Bernoulli; Jason Schwartzman as Daniel Bernoulli.  Right?)  Because of this tons of stuff is already named after them.  There's the Bernoulli Effect.  The Bernoulli Principle.  The Bernoulli Distribution.  The Bernoulli Theorem.  These range over the domains of statistics, fluid dynamics, and calculus--and they are only a small sampling of the discoveries pinned with the Bernoulli name.  Do we really need a Bernoulli Rule?  Really?  The rule itself is confusing enough as it is.  We don't need to go messing around with its name.

My primary source for this story is an article by C. Truesdale.  I learned about l'Hôpital's Rule in Mark Hansen's math for social scientists class.
Posted by Unknown at 7:27 AM