Mental_Floss runs down four of history's best hoaxes. They're a bit predictable, though, so here are a couple of my favorites to supplement:
The Trojan Horse has to be the boldest hoax in history. The premise--that the Greeks would offer the Trojans a gift of a huge wooden horse--is just weird.. What sort of gift is a huge wooden horse, anyway? Scholars will tell you this is because the Trojans really liked horses. This explanation explains nothing. But it makes for a great hoax, mixing equal amounts audacity, cleverness, and misdirection. 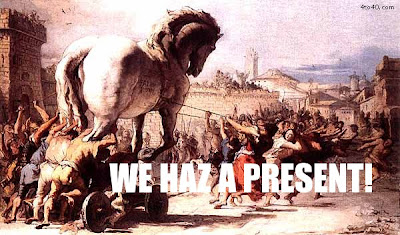 Sadly for the Trojans, there was no candy inside. Only pissed-off Greeks.

The Count Saint German made his way through 18th Century Europe scamming courtiers, spreading rumors of his mystic prowess (including his miraculous ability to never die), and issuing a stream of prattle so wondrous it lightens the heart. Here's Cassanova on Saint Germain (who knows about the accuracy - it's from Wikipedia):

The most enjoyable dinner I had was with Madame de Gergi, who came with the famous adventurer, known by the name of the Count de St. Germain. This individual, instead of eating, talked from the beginning of the meal to the end, and I followed his example in one respect as I did not eat, but listened to him with the greatest attention. It may safely be said that as a conversationalist he was unequalled.

The greatest part of the story of Saint Germain is that even now--hundreds of years later--impressionable young occultists will swallow the Count's stories like they were peer-reviewed scientific truth. Poor creatures.

In the annals of hoaxing, chapters and chapters--whole volumes!--should be devoted to the Australians. Something about the climate makes tall tales a near Olympic sport. Maybe it's the climate of free-flowing beer. If you're ever out camping with a group of Australians, inevitably one will tell you about the deadly Dropbear, a carnivorous version of the cuddlesome Koala. The Dropbear's most favorite snack is a tourist. It drops on them. And eats them up. And it doesn't exist. It's just a story to scare poor confused Americans. 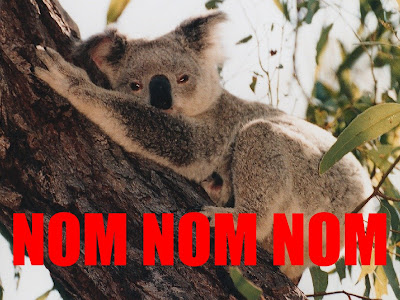 The Dropbear in its natural environment.
Even the cream of Australian culture can't help but engage in a little lying now and then. Pissed off about the utter nonsense of modernist poetry, two conservative poets sent in a series of meaningless poems to Australia's premier modernist poetry rag and signed them by the name Ern Malley. The hoax ended with the magazine's young editor Max Harris getting charged with obscenity for some reason. The funny thing about Ern Malley is that, well, even though his poems are meaningless twaddle, everybody likes them. I like them. Here's the first in the Ern Malley cycle:

I had often, cowled in the slumberous heavy air,
Closed my inanimate lids to find it real,
As I knew it would be, the colourful spires
And painted roofs, the high snows glimpsed at the back,
All reversed in the quiet reflecting waters
Not knowing then that Dürer perceived it too.
Now I find that once more I have shrunk
To an interloper, robber of dead men’s dream,
I had read in books that art is not easy
But no one warned that the mind repeats
In its ignorance the vision of others. I am still
the black swan of trespass on alien waters.

I love those last four lines. Bonus points for this story is that back in my career as an up-and-coming young Australian writer I swept the youth section of the Max Harris literary awards. Hurrah. 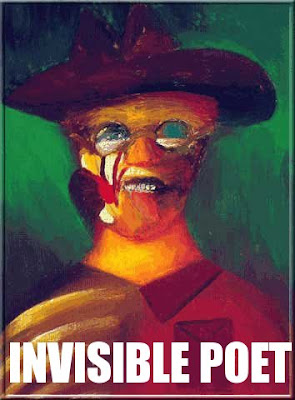 Ern Malley was a great poet. Shame he didn't exist.
The Japanese have really been very innovative about hoaxing, exaggerating, contorting, and refining the technique the with the same aplomb that turned robots into GIANT ROBOTS. Now, to set the scene: poodles are all the rage in Japan, costing upwards of a thousand dollars. A Japanese celebrity is on a talk show, chatting about her poodle when she complained that her poodle didn't bark and refused to eat dog food. Turns out the poodle was a lamb and some scam artist was selling lambs as poodles. And it also turned out that the whole widely-reported story was a hoax. How's that for innovation, kids?
Posted by Unknown at 2:10 PM

Email ThisBlogThis!Share to TwitterShare to FacebookShare to Pinterest
Labels: hoaxes

I wanted to point out that you missed 4 major hoaxes that actually affected history, and not mere tales:

1. The Protocols of the Elders of Zion -- This was a small pamphlet/book that was supposedly written by Jews that wanted to take over the world and had some grand scheme, but it was just a book to libel and defame the Jews as scapegoats.

2. The Rosicrucians -- After the dissolution of the Knights Templar, a shadowy organization was written about called the Rosicrucians. They don't really exist, and it's impossible to prove their existence anyways, because if you publically claim you are a Rosicrucian, then you're not, because a Rosicrucian would never reveal their identity.

3. Rasputin -- Some say he was a hypnotist, some say he actually had powers. Regardless, he coaxed the royal Russian family into doing what he wanted, which needless to say, permanently affected Russian politics. The hoax in this is he got everyone to believe he was some sort of magical prophet-like figure, when in fact he was a fraud who manipulated people.

4. The Old Man of the Mountain, leader of the Hashisheen. The word "assassin" is derived from the "hashisheen," a powerful Islamic schismatic cult that drugged their supporters and made them believe they were in paradise. Then they removed them from their gardens and didn't give them any more drugs. They told them to assassinate so-and-so, and if they did that successfully, they would be reentered into paradise (by dying). The hoax here, obviously, is tricking these people into believing they were in paradise to begin with. This also had great historical significance, if you look it up.

Look em all up and you'll have a good "Part II" to your Hoaxes post. ;)

Those are very good hoaxes. Although a part of me wants to believe about the Rosicrucians. The funny part about all these hoaxes is how enduring they are, even after they've been debunked. The Protocols of the Elders of Zion, of course, was used by lots of anti-semites. People still jabber on about all the crap Rasputin and the Rosicrucians did. Finally, if you guys are interested in more about the Assassins, check out this article from Damn Interesting: http://www.damninteresting.com/?p=896

Oh any thanks for commenting!

I'm using Kaspersky protection for a few years now, and I recommend this solution to everyone.