A Fact About Chicago 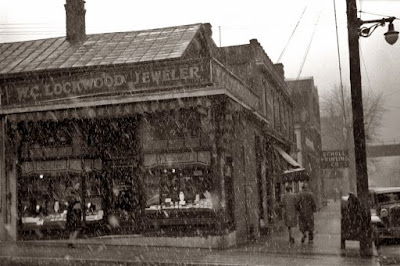 Image from Shorpy!
It seems that the adoption of the bowl would be a fairly straightforward process, but not in Chicago. Most of urban Chicago didn’t use bowls until the early 1930s. The social reformer Jane Addams called Chicago’s lack of adequate bowls “a disgrace of governance and civic will,” but it took a riot—the famed soup riots of 1933—to make the bowl a common addition to Chicago dinner tables.

The problem was simple: the various department stores in Chicago all got their flatware from a single supplier, S. N. Arch and sons and Silas N. Arch didn’t think there was much demand for bowls because of Chicago’s famed distaste for soup. “Steak, potatoes, that’s all a man needs,” the secretive Arch is reported to have said whenever the subject of bowls came up. “Bowls are for sniveling weaklings and the lesser races.”

Some families would have heirloom bowls, or bowls sent over from relatives, but surprisingly the majority of Chicagoans survived without the bowl for generations. Some were even proud of Chicago’s lack of bowls. “No soup here!” was the sign in the window of a prominent downtown café: soup, Chicagoans thought, was the food of the poor.

But during the Great Depression, charities set up to distribute food—mostly in the form of thin soups or gruel—found that they lacked the necessary bowls to get food to the stomachs of the hungry masses. On a dismal January night in 1933 after being denied food because of a lack of bowls, a horde of dispossessed young men stormed to the front of prominent department stores, demanding the missing piece of flatware. Police were called in, and twelve lives ended that cold night.

Silently, bowls entered the department stores—and kitchens— of Chicago and have stayed there ever since!
Posted by Unknown at 6:12 PM