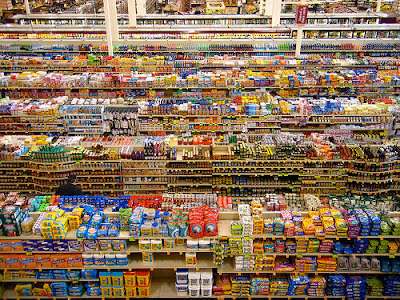 (Image from unasthetic, found on digg.)

So, to get the basic outline of my mood, add up these two pieces of media: I've been reading George Saunders' new book, In Persuasion Nation, and listening to some Joanna Newsom.

And let's just illustrate the mood: I was walking through the supermarket last night, and all the products lined up looked like little soldiers, and I kept on thinking that there was something horrible wrong and empty about a supermarket at night. Maybe something horribly wrong when you were alone, friendless, and poor - like I was - trying to find solace in food, in consumption, in buying. There was a hint that the supermarket, or whatever grim force had organized it, was actually responsible for my feeling lonely. And thus I imagined a horrible conspiracy mustered against me and against every other sensitive person: to somehow rob their souls of this bright essential thing, to feed our loneliness and despair so that we would buy more, only because when we bought more, we needed to work more. And so work itself became this grim fuel for an engine grand and sinister. This vision! it came to me suddenly! as if the curtain hiding it from my sight was just ripped away! And America was no longer America anymore, but one huge strip mall, the roads clogged arteries leading to depression and loneliness, the houses no longer comfortable, but cages, our diseased heart beating only so we could lurch further into - into what? Some inexpressible doom. And me! How little I seemed next to it! And I have the pride and conceit to think that my little sadness can break it.

Now, the other side of this feeling, which may be particularly modern, is that at the same time as I was drawing this rather apocalyptic vision of capitalism I knew that I was just in a bad mood, that this discontent was somehow contingent and temporary. Which didn't make the feeling any better. It was like Don Quixote saw his windmills, wanted with all his heart to fight them, but also knew, knew with the better force of his reason, that they were windmills after all, and that he was a faker, for all his bravery.

Maybe I'm being too hard on myself. My discontent is actually built on some pretty solid ground, I think. It's obvious, frankly, that our society is sick. And the precise source of that sickness may be a mystery, but it is fair to say that our materialistic tendencies are exploited in the extreme, while the spiritual and artistic fruits of our lives are left to rot.

The problem a young sophisticate faces when he turns and faces his culture with disgust is this: Do you turn away from the world, just because it seems for a moment wrong? That world is filled with plenty of people, people who may need help, and turning away from them in favor of Joanna Newsom albums and masturbation just seems a little bit solipsistic. But on the other hand, isn't it just pure ego to think that I, a wet-liberal sophisticate, just because I have some refined taste and political pretensions, actually have a duty to change the world? That those other people need my help? Because they don't have as good taste as me.

Beneath that, I whine to myself. I want someone - preferably the girl I'm interested in in a romantic way - to come and fix me. But, sad for me and sad for every single male sophisticate from the Song of Songs to the Counting Crows - the girl has her own life. And then, the cycle continues: I cannot even feel this selfish need wholeheartedly, I know it will pass, I know it is selfish, I know it is fake.

This wider cycle continues on. A cycle of alienation, disgust, and separation. And yet what is one to do?

Now, normally I really like supermarkets. I find there to be such a joy in looking at the fields of broad bright color of the food, and to know that you can have it, eat it - have you ever stopped to think the sheer bounty that you can find at your local supermarket? Foods of every sort, chocolate, ice creams, pizzas, peaches anything you want! Normally I can control myself from feeling alienated. I can look at everything pretty judiciously and gently. But what makes the floodgates of my ego fall down, and lead to this - to mopey sadness? To this mixture of pride and alienation? To this tangle of despair and ego? Because whatever it is, I think that more of us feel this confused feeling - only it's hard to name, hard to express.

I too feel overwhelmed by my surroundings and experience the world as an oppressive force, but I am constantly reminded that we as individuals have a lot of leeway in deciding how to experience and interact with the world. This is especially true when one considers how fortunate we are to have been born in the U.S. Sometimes we forget it, but we enjoy a society in which it is possible to invent and reinvent ourselves over and over—to live one lifestyle and then transition to another. This freedom isn't simply economic, it's also a function of the sheer amount of land and variety of environments available in the U.S. I guess I'm not really responding to your emotional situation with this reply, but for some reason your post got me thinking about this. I guess it relates to my long-standing belief that people really do have a lot of control over their emotional state. That a lot of our experiences are tinged emotionally by the concious choices we make concerning our approach and response to everyday events—the routine little hardships and victories alike.

I intended to say "at times" at the end of that first clause. Is there no way to edit comments?