The Wallpaper That Named America 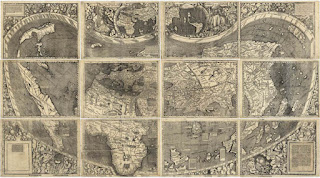 Columbus discovered America.  America is named after Amerigo Vespucci, who did not discover America.  In the lacuna between these two well-known facts there hides a story of adventurers, pickle-sellers, forged letters--and wall-paper.

Before the story begins, a Roman prologue.  In the Second Century AD there was a Greek-speaking Roman citizen from the province of Egypt named Ptolemy.  (Students of ancient history know that this is not anything unusual:  almost every Greek-speaking Egyptian ever was named Ptolemy.)  This Ptolemy, Claudius Ptolemy, put all of his era's geographical knowledge into a single book titled, with characteristic Roman creativity, the Geography.

Ptolemy's Geography mapped the known world, and mapped it well.  Europe is drawn with care.  The Persian Gulf looks suitably gulf-like.  Important rivers are all in the right places, including some in the far east.  The Indian Ocean exists.  The map even shows parts of China, though in blurry, uncertain haziness.

For more than a thousand years the Geography was the Google Maps of princes, merchants and explorers from Bruges to Baghdad.  In the late 15th Century, Christopher Columbus turned to it as he was trying to convince European kings to bankroll his ambitious globe-crossing voyage.  Columbus--who we've written about before--was the last man on earth to find the Geography useful.

That was because of what Columbus discovered once he sailed deep into the Western Ocean:  the New World.  But Columbus never knew the significance of his discovery.  When he first made landfall on that first unnamed idyllic Caribbean island, he assumed he was on East Coast of Japan, and that the Caribs were vassals of the great Khan.

Enter Amerigo Vespucci, a man Emerson derided as a mere "pickle seller" and a "thief."  Vespucci was a Florentine explorer who made two trips West.  A certain air of vibrant disreputableness hangs around him.

In the early 1500s, Vespucci wrote letters from the New World, describing a huge continent extending south of the Indies, bordered on both sides by ocean.  In Ptolemy's Geography--a book, remember, that had been state-of-the-art for 1,300 years--there was no huge southern continent that extended past the equator.  The conclusion was mind-blowing.  The world was big.  There was a whole new continent.  Florentine printers gathered these letters together, spiced them up a bit, and in 1502 or 1503 published them as a book called Mundus Novis.  The New World.

Instantly, people demanded an update to Ptolemy's previously immortal map.  A flurry of sextants and compasses scribbled across pages as publishers and map-fanciers rushed to be the first to make a accurate map of the new earth.

Enter two Germans--Martin Waldseemuller and Matthias Ringmann, cartographers.  They produced a map now known as the Waldseemuller map.  It was printed on 12 sheets measuring a massive four and a half by eight feet.  It was probably the largest map then made, and like all cool maps, it was meant for display as much as it was meant for navigation.  It was wallpaper.  If it were around now, it would be advertised in the Skymall catalogue.

The Waldseemuller map was more than just big.  It was more than just cool.  It also included a certain brand new exciting continent hanging out to the far right, stretching below the Equator.  There, in the mostly empty space, was printed a name in serifed all-caps.  America.  The name was probably made up by Ringmann--a feminization of Amerigo.

The map was popular.  German universities clambered to pick up one of the thousand printed copies.  Students made copies of it and showed it to their friends.  In modern parlance, the map went viral.  As the map spread, so did the name America.  In the middle of the century Gerardus Mercador--he of the projection and a cartographical superstar in his own right--decided that the whole landmass of the New World should be called America.  Despite two centuries of Spanish complaints to the contrary, America would be America forever.

As we have lately come to understand, our previous representation pleased very few people. Therefore, since true seekers of knowledge rarely color their words in confusing rhetoric, and do not embellish facts with charm but instead with a venerable abundance of simplicity, we must say that we cover our heads with a humble hood.