Lyndon Johnson And The Art Of The Impossible 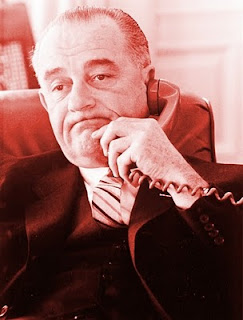 Politics is the art of the possible.  No matter the justice of our causes--be they public healthcare or world domination--without enough votes, they remain only dreams, fit for little more than mid-level Political Science class discussion sections and Sunday newspaper magazine articles.

As a Senator Lyndon Johnson had learned the art of the possible better than anyone else.  He counted votes like a gambler counts cards.  No matter how glorious the cause, Johnson wouldn't step behind it unless he was sure that he could win.

This didn't mean Johnson wouldn't fight for things he believed in.  To pass the 1957 Civil Rights Bill, Johnson fought like an angry father in a revenge film.  Instead of giving speeches on the Senate floor, he pressed palms in the cloakroom, convincing people one-on-one, one-by-one, until he was sure that the vote would go his way.  But he fought because he looked at the votes and saw that he could win.  Though the law had been watered down when it passed, the 1957 bill was the first piece of civil rights legislation signed in 82 years.

At that point, Johnson had been sitting in public office for two whole decades, first as a Representative and then as a Senator, and he had done very little for the cause of civil rights.  For most of this time he had stood as an arch Southern conservative, batting down every mention of civil rights, squashing every attempt to promote equality between the races, filibustering every hope of reform.

Because the votes weren't there.  If he had promoted civil rights, he would have been abandoned by his southern allies--for what?  For a bill that would have never received enough votes to even win election for class president.  Lyndon Johnson would fight for causes he believed in--but only for causes that could win.

But Johnson teaches us that sometimes a politician must try the impossible.

After John F. Kennedy was assassinated, Lyndon Johnson was sworn in as America's 36th President and the nation mourned.  Four days later, on November 26th 1963, Johnson and his advisers tried to figure out what the new President would say to his first speech to the joint houses of Congress the next day.  The advisors told Johnson that he shouldn't talk at all about civil rights.  It would piss the Southerners off--and they were LBJ's base.  Why should LBJ piss the Southerners off just over a little thing like civil rights?  Civil rights was a lost cause.  The President shouldn't waste his time on lost causes.

"Well, what the hell's the Presidency for?"  Johnson asked.

The next day Johnson delivered a stirring speech that called for a landmark civil rights law in the memory of John Kennedy.  This would be the Civil Rights Act of 1964, the piece of paper that ended segregation in the South, and started to close the long chapter of legal racism in the US.

Johnson understood that the Presidency stands outside the normal political calculus.  The President is not bound by the normal strictures of political reality.  By the celebrity and respect of the President, he can rally support for those worthy but politically unpalatable causes that would otherwise languish in the Hall of Impossible Political Dreams.  If he fights for them.  And Johnson was a fighter.

Today America languishes, and every cure for our malaise seems to be outside the realm of the politically possible.  That's why today it is especially important to remember that what seems impossible can quickly become possible, as long as we're crazy enough to fight for it.
Posted by Unknown at 1:03 AM