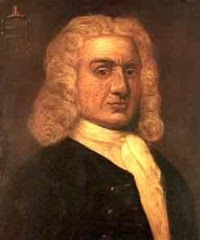 Captain Kidd's name occupies the highest strata of pirate fame--the strata that's festooned with eye patches, peg legs and parrots, the strata that's immortalized in millions of seven year olds' Halloween costumes. But recent research has shown that Captain Kidd might not have actually been a pirate after all. The poor man was probably framed.

There's an important distinction to make between piracy and privateering. Being a pirate is relatively easy. You outfit a ship (with lots of cannons and stuff), go out on the ocean, and every other ship you see--you try to steal their stuff. Privateering is another matter entirely. To be a privateer you get a fancy piece of paper from your government called a letter of marque and then you prey on other country's ships and it's all legal.

This was the distinction which Captain Kidd hoped would save his life. See, Captain Kidd was hanged for being a pirate. But he claimed that he had a letter of marque. He was a privateer.

The only problem was that Kidd's letter of marque had been issued in pretty dubious circumstances by a cabal of powerful men who wanted to personally profit from Kidd's privateering. The cabal which gave Kidd his letter of marque were all high-ranking members of the current government, and when Kidd was captured and tried, none of them would jump to the poor man's defense for fear of, you know, being disgraced for outfitting a pirate.

When Kidd was hanged the noose broke, leaving Kidd squirming, in pain, hanging from the scaffold--but not dead. At the time this kind of thing was considered a gentle divine suggestion that a miscarriage of justice was being committed, but people wanted Kidd eliminated, and so he was strung up again and sent to Pirate Heaven. Or Privateer Heaven, if you prefer.

I learned about Captain Kidd from Angus "Pirate Expert" Konstam's story on BBC History Magazine's June 2011 podcast.
Posted by Unknown at 12:19 AM