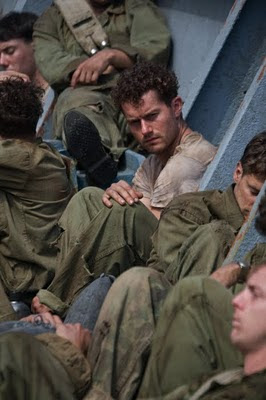 Like my grandma watching a Waynes Brothers movie, I can't tell anyone apart.
The Pacific is a beautifully shot TV show which tries to explode our heroic myths about war and I cannot understand it at all even though I tried really hard.

I tried really hard to like The Pacific. I read episode guides to try to figure out which characters were which. But after about forty minutes through the second episode squinting trying to figure out whether there were two curly haired dudes or one and who the guy was who won the medal of honor and why he won it I put The Pacific on pause and went to do something else--and my life was not a single smidgen worse.

Email ThisBlogThis!Share to TwitterShare to FacebookShare to Pinterest
Labels: subjective reviews, the Pacific

Agreed. Although I sat through the entire series. It wasn't nearly as explosive or engaging as Band of Brothers. The script tried to build upon that previous HBO series, while being more unpredictable and loose.

There was far too much focus on characters that were never cemented or built up. The only memorable one was the guy in the picture, but the fact I can't name him attests to the state of the series.